close
FEATURE: The legendary auteur discusses old age, getting the girl and potentially working with Cate Blanchett and Reese Witherspoon 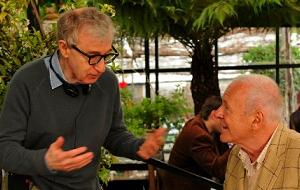 Woody Allen, who's now 74, would love to turn the clock back to the days when he could appear in his own films, and get the girl without causing unwarranted skepticism from his audience.

Launching his latest London-set odyssey You Will Meet a Tall Dark Stranger he declared at the Cannes Film Festival on Saturday that he has always harbored "a grim and pessimistic view of life."

The narrative is built around a potpourri of passions, ambitions and anxieties viewed through a pair of married couples and a fortune-teller. At the end the only pair left in any state of bliss are slightly crazed while everyone else seems miserable.

"Life is a painful, nightmarish and mean experience," said Allen, warming to his theme. "The only way to get it through is to tell yourself some lies and deceive yourself. I am not the only one to think so. Nietsche, Freud and O'Neill all thought that you have to have delusions to live."

Surrounded by some of his cast including Naomi Watts, Gemma Jones, Josh Brolin and newcomer Lucy Punch, Allen finds nothing to console himself in his senior years. "I do not want to reach 100 and have to use a walker and am constantly dribbling. My relationship with death is that I am strongly against it. My parents lived a long time so perhaps I have good genes."

He continued: "I find old age is a lousy deal. There is no advantage of getting older. You do not get wiser - only your back hurts more, your eyesight is not as good, and you need a hearing aid. It is a bad business. I would advise you not to do it. There is nothing romantic about elderly characters called 'gramps.' My advice is to stay young as long as you can and keep getting the girl."

Although normally he would not write a script with particular actors in mind, Josh Brolin came in to the frame when he saw his performance in W. He was also keen on the idea of working with Anthony Hopkins who happened to be available. He has no reserve list of talent he would like to work with but admitted a sneaking wish to find a way of involving Cate Blanchett and Reese Witherspoon in future projects.

The film was shot in London, partly because it is cheaper than New York, and partly because he prefers England's cool climate, grey skies and rain to the Big Apple's summer oppressiveness.

You Will Meet a Tall Dark Stranger was greeted warmly by the international press corps but the reception fell short of wild enthusiasm. It's not that kind of film.