close
FEATURE: Grown Ups looks to be another successful chapter in the comedian's reliable career

Adam Sandler's Staying Power: A Look at How the 'SNL' Alum Has Maintained an Audience 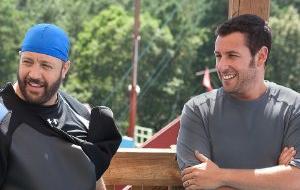 Adam Sandler may not be the most talented Saturday Night Live alum. But he could be the most prolific.

Even Will Ferrell finds his career at a crossroads, given the lukewarm reception for both Semi-Pro and Land of the Lost. And Elf, Ferrell's breakout starring role, was only seven years ago.

And then there's Sandler.

The comic actor drew horrific reviews early in his career for movies like 1995‘s Billy Madison and 1999‘s Big Daddy.

But his core audience kept the faith, allowing him to stretch as an actor with movies like Punch Drunk Love so long as he delivered the occasional Wedding Singer or I Now Pronounce You Chuck & Larry.

Sandler always returns to his angry man-child shtick, a lunk whose scratchy voice rises to a crescendo when pushed too far.

Grown Ups follows five old pals (Sandler, Chris Rock and David Spade among them) who reunite to mourn the loss of their old basketball coach.

Jenelle Riley, National Film and TV Editor with Back Stage, credits Sandler's connection with his audience for a self-sustaining film career.

"Every actor knows comedy is the hardest medium to master, and he definitely knows what he's doing," Riley says. "He's also grown up with his audience, so he's gone from playing these boys who won't grow up ... to a guy who has to confront homophobia in I Now Pronounce You Chuck and Larry."

She says Grown Ups should be a smart combination of his childish tics and an increasing penchant for acknowledging the need to mature--at least in some aspects of life.

Melinda Petrow, spokeswoman for Fandango.com, says Sandler's work ethic and loyalty has served him well since the mid-90s.

"He surrounds himself with a loyal family of professionals who speak a simpatico language," Petrow says. "Everyone agrees to work on a budget and check their egos at the door, so there are no production delays and so his films always meet their release dates."

Despite his fame, Sandler still evokes an Everyman persona, the kind of guy to whom audiences can relate, she says.

"He doesn't try to play roles that are insanely out of his league," she says.

And when audiences pony up their money for a Sandler film they know what to expect--"a certain amount of gross-out gags, beautiful women, romance and puerile humor," she says.

The actor is now in his 40s, but there's little sign he's about to leave his flock behind.

"As his audience grows older, Sandler has thrown in subplots about his characters facing mid-life crisis, as in Click and Grown Ups," she says.

John Singh, spokesman for Flixster.com, says Sandler's appeal isn't bound to the demographic who grew up with him in movies like The Wedding Singer.

Sandler's humor is "a little raunchy, a little edgy, but also really familiar and really appealing. It's just bawdy enough for adults to enjoy, but also mild enough for younger audiences, and that's a great combination," Singh says.