Costume Publicity: A Look at the Signifigance of Superhero Attire 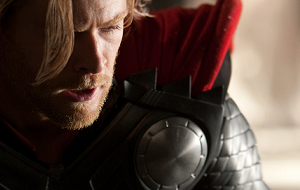 It's no accident that conceptual art from the upcoming superhero films Thor and Captain America: The First Avenger is suddenly all over the web.

It's always a nerve-wracking experience for comic book fans to see what their favorite characters look like in a live-action format.

Does the actor resemble the superhero in question? And, more importantly, what changes were made to bring the iconic costume to life?

The stakes couldn't be higher for both audiences and studios alike. Fans sometimes wait decades to see a particular character on the big screen, while the studios know the right superhero project can mean a mega-franchise with all sorts of merchandise opportunities to boot.

So a few fancy illustrations of Chris Evans in his Captain America get-up and Chris Hemsworth donning Thor's blonde locks can be the perfect way to whet fans' appetites for the movies to follow--and ease the visual transition for Fanboy Nation.

Stephen Fishler, CEO of Metropoliscomics.com, says studios are eager to create just the right kind of buzz to help build the profiles of superhero movies. Thus the carefully orchestrated leaks to do just that.

"A lot of characters don't necessarily translate well to live action," he says.

Consider the upcoming Jonah Hex film based on a DC comic book. The western setting makes it easier for filmmakers to mimic the storylines from the printed page, he says.

"You can't screw that up as much as Captain America," he says of the star-spangled hero who fights crime in a red, white and blue suit. And what about characters like Galactus, the interplanetary baddie who made an appearance in Fantastic Four: Rise of the Silver Surfer.

The film eschewed his blue-and-purple armor and gravity defying helmet for a more amorphous shape-shifting creature.

"Put a human being in that costume, and that's the silliest thing you've ever seen," he says. "To create a look that's believable, you have to tone done what works in comic books."

The process of taking a beloved--or even obscure--superhero and transporting them to the big screen is fraught with complications beyond the look of a given film.

Consider The Spirit, a film brought to life by comic book stalwart Frank Miller. The hero lacked the kind of arresting origin story and sense of purpose that a character like Batman has in spades.

For all those reasons, superhero films demand top-notch talent to sell them to the public, Fishler says. The characters don't always get that.

"Spider-Man's done well. Batman's done well. They have visions of grandeur. They think everything they take out of Marvel [comics] will do well," he says. "Nothing looks worst that a low-budget superhero movie."

So consider the studio costume leaks an early attempt to swing the buzz in a project's favor. But Fishler thinks the studio has little wiggle room should the fans erupt in anger over the images in question.

"It's hard to imagine them altering the character based on initial buzz of some images," he says.