close
FEATURE: Tom Cruise and Cameron Diaz try in vain to be casual

How NOT To Do Viral Marketing: A Look at the Weak 'Knight and Day' Campaign 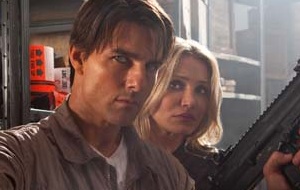 Did you know Tom Cruise and Cameron Diaz could kick a mean soccer ball?

A new online video connected to the stars' upcoming film "Knight and Day" shows them cavorting on the set between takes.

The actors look like they're practicing for the World Cup, kicking the ball back and forth and showing off some pretty fancy moves.

It's a safe bet a little digital trickery is in play, or today's movie stars have way too much time on their hands to hone their soccer skills.

The folks at 20th Century Fox clearly want to bank on World Cup fever, but the clip seems equally designed to show a softer side to two of the most polished stars on the planet.

But is this any way to market a movie, and will people rush to their Facebook and Twitter accounts to share this with friends and family?

Chris Thilk, who oversees moviemarketingmadness.com, says this isn't the first time Cruise and Diaz teamed up to spark a viral video for the movie.

"There was the stunt rehearsal footage a couple months ago that was supposed to set the world on fire as well," Thilk says. "So there's a deliberate attempt, it seems to me, to capture these two stars who have such carefully cultivated public images and make them seem ‘normal‘ in advance of a high-concept movie that is all about flash and sizzle."

He sees the clip as being "as coordinated as the actions sequences," from their film. And while the pre-packaged nature of the clip will strike some as cloying it won't have that effect on everyone.

"There's a good chunk of the audience who's likely to completely dig this and feel like they can relate more to these two huge movie stars and, therefore, are more open to seeing a movie with them in it," he says.

Ben McConnell, an author of several social media books and principal with the consulting firm Ants Eye View, says the video clip likely won't sell tickets to those on the fence about the film.

"The attempt to have two mega stars appear to be spontaneously and authentically captured by paparazzi just comes across as contrived," McConnell says.

Cruise suffered sour publicity a few years back for his couch jumping antics, and a clip like this does little to endear him to regular movie goers.

"He's been doing a masterful job at this the past month on his Facebook and Twitter accounts," he says. "He's interacting with fans while gingerly promoting his upcoming Broadway show."