close
FEATURE: The starlet has been hit with a rush of bad publicity

Is 'Jonah Hex' The End of Megan Fox? 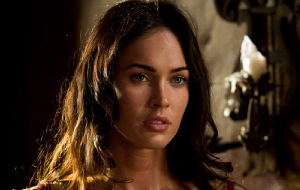 But have movie goers already had their fill of the stunning brunette?

Fox rose to fame alongside Shia LaBeouf in the first two Transformers films. But she either quit the third installment or got the boot, depending on which side of the argument you believe. And she's always been better at generating buzz--and uncensored quotes--than delivering killer performances on screen.

Now, she's playing the love interest in Hex, a western about a disfigured bounty hunter (Josh Brolin) gunning for the man (John Malkovich) who savaged his face.

So where does that leave Hex, a wannabe franchise lacking the kind of brand recognition other DC Comics movies like Superman have in abundance?

"She's a lighting rod. She's a beautiful girl ,,, drama is going to surround her no matter what she does," Parsons says.

And that won't change a lick with the release of Jonah Hex.

"She could be talented enough. But Jonah Hex won't prove that either way," he says. "She looks great [in the film], but it's not the movie that's gonna make or break her as an actress."

And the bad blood spilling over from the Transformers casting calamity "will outweigh anything with the movie," he predicts.

"Fox's strength is action films so her casting in this movie as an old west bombshell is very appropriate," Dos Santos says. "Aesthetically speaking, she is the ideal actress for the role as she is able to sashay and maintain her sex appeal while shooting the bad guys."

Audiences won't expect a Meryl Streep-style performance from Fox in Jonah Hex. That's not why she burst onto the film scene in the first place, Dos Santos says.

"She's famous because she is Hollywood's newer version of Angelina Jolie without the acting chomps," she says.

And that's more than enough to justify her appearance in the new film.

"Jonah Hex will not break any box office records but Fox will attract a good-sized, teenage male audience simply because she can fill out a bustier," she says.

It's her connection to young male fans which could help her career endure, Parsons says.

"She says things in press conferences that make it seem she's in tune to the fan boys," Parsons says. During the press junket for Hex, Fox quoted some lines she found on a Lord of the Rings message board.

Parsons says either it's a brilliantly planted bit culled from a publicist, or she's really engaged to what her fans have on their minds.