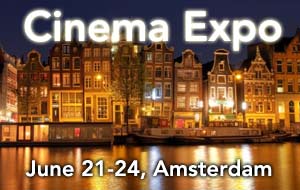 Wednesday Afternoon Update: Walt Disney Studios took over the stage at the RAI Auditorium to tout their impressive upcoming slate of theatrical releases.

The material on display from Pirates of the Caribbean: On Stranger Tides and TRON Legacy received the warmest receptions from the Cinema Expo crowd. All that it took was a look at development art of Penelope Cruz in costume for her role as Angelica in On Stranger Tides to get the crowd buzzing. As for TRON, a new trailer was welcomed with excitement.

Frigo and Hollis also focused on director D.J. Caruso's I Am Number Four and Steven Spielberg's War Horse, which will be the first two releases to result from the Disney/DreamWorks partnership.

Other noteworthy aspects of the presentation were videos touting Gnomeo and Juliet, an animated flick which features new songs from Elton John, and Jason Segel's take on The Muppets property.

After a screening of Oliver Stone's Wall Street: Money Never Sleeps, Paul Hanneman and Tomas Jegeus, Co-Presidents of 20th Century Fox International, introduced a ton of new footage with the help of some actors and filmmakers.

Jack Black kicked off the night with a bit of shtick that led to the presentation of clips from Gulliver's Travels. Even though the film will be converted to 3D for its release, the clips were presented in 2D.

Hanneman and Jegeus then took the stage again to show off a first look at Unstoppable, the latest Tony Scott/Denzel Washington collaboration. The film focuses on a runaway train that Washington and a protege played by Chris Pine set out to stop before it crashes and unleashes deadly chemicals.

Robert Rodriquez sent along a taped message to introduce footage from Predators, and that was followed by clips from the period drama Water for Elephants, which stars Reese Witherspoon, Robert Pattinson and Christoph Waltz.

Director Chris Gorak and star Emile Hirsch were on hand to show off concept art for The Darkest Hour, a new alien attack flick that begins filming in a few weeks.

The Big Year was introduced by a video message from stars Steve Martin and Owen Wilson. The comedy also stars Jack Black, who played off the video from the auditorium stage.

The event closed with an extended look at Rio that director Carlos Saldanha (the Ice Age films) introduced live.

Despicable Me, which features the voices of Steve Carell, Russell Brand, Kristen Wiig and Jason Segel, was screened for Cinema Expo attendees in the morning. BoxOffice.com is currently predicting a $28 million opening for the animated flick.

David Hancock, Sr. Analyst and Head of Film & Cinema, Screen Digest: There are 19,095 digital screens across the globe, which represents 17.5% of the world's screens.

France is the leading territory in Europe with 1,100 digital screens, 780 of which are 3D.

On the digital cinema transition: "While progress is being made, Europe still lags some way behind the US. By the end of the year, the number of 3D screens there will have doubled. It already represents 10 per cent of screens with 20 per cent of the theatres digitally equiped"

On the fight against movie theft: "France is one of the only countries with a specific amendment on camcording such that it is now considered a specific offence. It is hoped that in due course all European countries will adopt specific legislation to deal with this problem."