close
INTERVIEW: The director is responsible for one of the summer's most anticipated films. 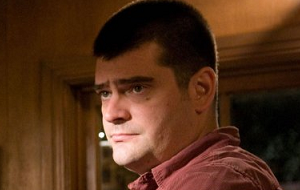 Do you remember the first time you saw Predator?

I was 14. They were showing it at a movie theater in Westwood on Wilshire Blvd. called the Avco. I can still picture standing in line with friends on opening night. I loved it--it was one of those films that at the time, no one knew it would become a classic. It certainly resonated with everybody I saw it with that night, but we couldn't articulate what it was. But we all knew we'd just seen something big.

Not to blow your cover, but I'm assuming at 14 you were a little scared of the Predators. What was it like that first time you had to go up to a Predator on set and tell it what to do?

[Laughs] That was kind of strange. Very strange. All these guys in their suits, Derek [Mears] and Bryan [Steele] and Carey [Jones], they're all big guys in general--I'm standing there looking up at them. One time, one of them had an articulated head where the mandibles could move--they have several engines that K.N.B. and Greg Nicotero had built into the Predator suits. But when the mandibles were moving, the engines were buzzing in his ear and the actor couldn't hear me. I'd step up to him and go, 'Hey, I was hoping you could do it this way,' and he'd say to me, 'What! What!?' At first, I thought he was angry! Before I learned it was a hearing problem, I got a little nervous having to instruct a Predator.

Derek Mears also plays Jason in the Friday the 13th films--what is it in the way he moves that gets him cast as these silent, scary monsters?

He's an actor. In real life, Derek is just a nice guy--he's a sweetheart with a smile and a kind word for everybody. I'm very fond of him. But if he has to bring the scary, he does, and he does it well. We certainly spoke about the body language and what felt right or what felt over the top. It was always a balance. The guys all understood the importance of the physicality of the character. You're expressing emotions through the shrug of the shoulders, bowing down your chin. There's a whole set of things a silent character can put across if the actors do it really well.

And you've also got to order around a cast of pretty imposing tough people. How would you handle it if Danny Trejo gave you a dirty look?

We wrestle! No, he's a teddy bear. Not that I want to ruin his image. But I did wrestle Oleg Taktarov [UFC champion who plays Nikolai, a Russian commando]. That was pretty one-sided. There were only two hits: he hit me and I hit the ground.

People were surprised that Adrian Brody was cast as the lead, but he's got the intelligence and he's also got some serious muscles.

One, he's huge in this movie. He really bulked up. There's a scene at the end of the film where you're going to see how big he got--it's really impressive. There were early criticisms of his casting, but if we had gone with an Arnold Schwarzenegger-like character, we would have been persecuted for that, too. We weren't trying to remake the film--we were trying to do something that would stand entirely on its own feet. Also, if you look at any theater of war, of the actual soldiers in battle nowadays, 99 percent of them look like Adrian. The other one percent may look like Arnold. Modern day warriors aren't the bulked-up, muscle-bound men of the '80s. That's not reality. And what we were going for is something that could be plausible for the viewers. And he's a great actor, by the way. That's the most important thing-he's superb.

And handsome. There's been so much secrecy surrounding this film, especially about what the Predators look like.

That's always a difficult balance. You want to tempt viewers, but you don't want to show them all of your assets. The less you know, the more you get excited.

And you've put an emphasis on practical effects over CGI.

Chewbacca over Jar-Jar any day.

Did that take any convincing?

Will Predator fans see any homages to the original?

Certainly. That was another fine balance, mind you, because we wanted to throw in some nods and at the start, there were a lot of references. But it was a question of finding the right balance. We want the fans to be able to smile and go, 'Yeah!' but at the same time, we want them to enjoy a new journey in a new film.

This is your fourth film but your first franchise. What is it like making a remake when everyone you meet feels entitled to an opinion?

I was a big fan and I know the scrutiny. I was aware of it and anticipating it. I'm under the microscope. I guy who used to cut my hair in Budapest had a Predator tattoo--I completely understand the passion and intensity of the fans. I certainly kept them in mind when we were making the film-every decision we made was a question of, 'Do you think they'd like this? Do you think they'd enjoy this?' It was a film made by fans for fans.

How did you prepare for the tone about a film of human prey? Did you go back and read The Most Dangerous Game?

Actually, that was one of the books I read. I even read up on the old comics. I've always loved the universe, so I just got to revisit it.

I read some of your old interviews and I found one you did in 2005 when your first film, Kontroll, hit the States. You were talking about how you insisted on shooting in 35 mm and said, 'Robert Rodriguez would be angry with me.' Then, you two hadn't met. And now he's your producer.

[Laughs] That's funny! And we did shoot Predators digitally--it's my first digital film!