Tuesday Afternoon Update: The new openers have seen modest growth today so far, but are still tracking very poorly in general. Get Him To The Greek leads still halfway through the day with 1.3% marketshare or 463 tweets. Marmaduke is having the roughest of times, and has actually dropped to 0.3% market share today (a paltry 105 tweets) so far, down from 0.4% yesterday. The folks over at Fox seem to have really dropped the ball in terms of its online marketing push (and just advertising in general) as it is clearly not resonating (see the Facebook analysis for more proof). In other news Resident Evil: Afterlife 3D saw a new poster land online today which has seen it bump slightly to 1.3% market share (473 tweets), up from 0.2% yesterday (179 tweets). Scott Pilgrim vs the World is still benefiting from increased buzz thanks to its new trailer yesterday and remains in the #2 spot for all upcoming films so far today with 6.7% market share and 2,447 tweets. 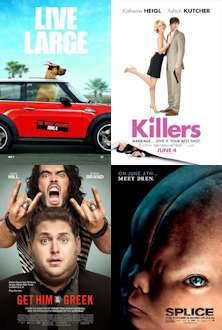 Tuesday Morning Update: After the poorest Memorial Day weekend in almost a decade the Box Office will attempt to rebound this weekend by offering four wide release films for the first time since March 12th of this year. First up is the live action adaptation of Marmaduke, the beloved, timeless comic strip. It started with a very skimpy 283 tweets on Monday, and an anemic 0.4% of the buzz market share. Adding insult to injury, its positive ratio was a very low 18.73%, with a hefty 13.78% negative rating. By comparison, The Tooth Fairy had 283 tweets its Monday before release, Furry Vengeance had 233, The Spy Next Door had 261 and Diary of a Wimpy Kid had 293. At its present pace it would appear as though 1,800 tweets will be its upper limit, and even giving it the lowest ratio of the above comparisons (Wimpy Kid's 251) it would appear as though $7 million might be its upper limit for this Friday.

Next up is the comedy Get Him To The Greek which secured 566 tweets this Monday, the most amongst this weekend's openers, for 0.8% market share. Though it was the most, it is hardly an impressive number considering that the similarly targeted Hot Tub Time Machine managed to secure 1,299 tweets its Monday before release. One consideration worth mentioning is that since Monday was a holiday in the US that does generally depress tweet totals slightly, so Tuesday will no doubt be telling for all of the new openers. One bright sign here though is that it has the most fresh tweet ratings of any of the new openers (29.86% positive, 8.66% negative) which might help to secure more business during its run through positive word of mouth. It has been getting quite a large marketing push, so this pretty low total is somewhat disconcerting. Unless it picks up greatly during the week or it can appeal to older audiences (ala The Hangover) it is going to have a hard time breaking out past the mid to high teens.

Ashton Kutcher and Katherine Heigl's spy/romance/comedy mashup will be going head to head with Greek as it tries to appeal to young women and men and expand beyond the typical romantic comedy borders. It had 491 tweets on Monday, for 0.7% market share. Again a pretty low number, by comparison, Valentine's Day had 2,234 its Monday before release, Did You Hear About The Morgans had 159, and Date Night had 476. With 24.44% positive tweets and 7.13% negative tweets it was pretty much average on the day also. I believe we are going to see quite a bit of cannibalism this weekend between the titles and this and Greek are probably going to suffer at each other's expense the most. I would expect it ratio to come in a bit higher than Date Night and Morgans since its stars are much more social media friendly, hell Ashton Kutcher is practically the face for Twitter. As such I'd expect something in the range of 500-600. Much will depend on its expansion through the week but as of right now $5 - 6 million opening day looks likely.

Lastly, we have the genetic thriller Splice which will hope to drum up business in the very crowded market place from those looking for something a bit more edgy. It managed to account for 387 tweets on Monday and 0.5% market share. By comparison, The Fourth Kind had 515 tweets its Monday before release, and The Crazies had 836. Another alarming point is that its ratings were the poorest of all the new openers on Monday, with just 17.05% positive and 14.90% negative. Though it is only one day that negative percentage is higher than even A Nightmare On Elm Street. These numbers are not positive at all, and considering its ratio will very likely be 800 - 900 it looks like a long shot for the film to go any higher than $3 - $4 million for Friday.

Tags: Get Him to the Greek, Killers, Splice, Marmaduke, Scott Pilgrim vs. the World, Resident Evil: Afterlife
Print