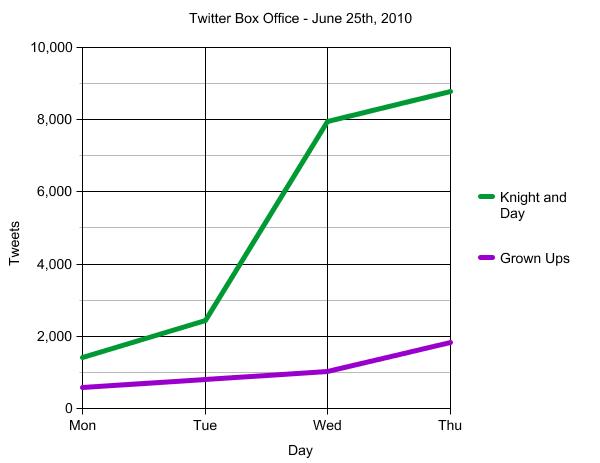 Friday Morning Update: Knight and Day really dwarfed Grown Ups this week in total buzz, but much of that was thanks to its mid-week opening and greater appeal to young women, aka Twitter superusers. Knight and Day continued where it left off on Wednesday yesterday with 8,784 tweets and 11.8% market share, up from 7,951 tweets and 10.6% market share. The Wednesday opening really does throw a spanner in the works, especially with the added fact of its very disappointing $3.8 million opening day tally which created a buzz snowball effect.

I've compared it to Killers for much of a week since I think the target audience will be quite similar but obviously the mid-week opening makes that rather difficult. Another interesting comparison is that in its first two days of release Killers scored 2,967 and 4,944 tweets, or just under half Knight's buzz. All things considered, including the search-friendly title and increased buzz thanks to performance we should be looking at a $7 million Friday for a full week ratio of just under 3,000. Yes that would put it right up there with The Last Song which seems high but I believe that the circus now around Box Office underperformances this summer, coupled with Tom Cruise haters more than compensate for the throngs of Miley Cyrus fans (many of whom probably don't even know what Twitter is).

Grown Ups actually saw a decent surge yesterday with 1,824 tweets or 2.5% market share, up from 1,034 tweets and 1.3% market share. The uptick was very welcomed considering its very low key week, but it will likely be too little too late for it to reach the lofty heights of $35 million+ most tracking sources indicated.

Its big Thursday pushed it in front of Couples Retreat by a couple hundred tweets after it lagged behind for the first three days of the week. Given that Couples had an ultra-low ratio not yet replicated for the audience I'm weary to project the same for Grown Ups, especially considering its huge advertising spend. I think it will more likely come in with a 400 ratio and $10.75 million on Friday. Still a very solid number, but with that projecting out to a $28 million full weekend it will hardly be labelled as a successful opening given the history of Sandler and now James.