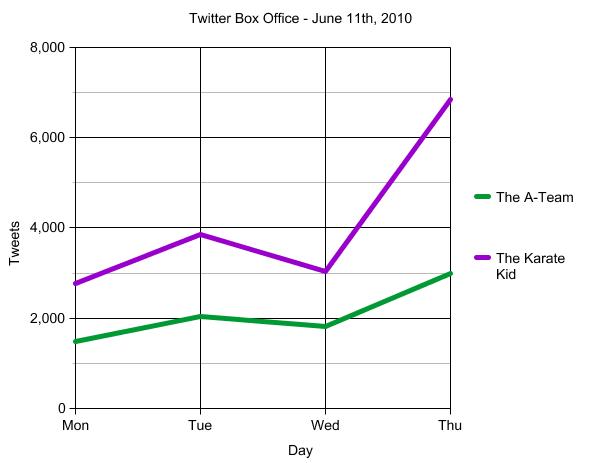 Friday Morning Update: As it has for most of the week, The Karate Kid continued its buzz dominance on Twitter with 6,839 tweets and 13.2% market share. This was up from yesterday's 3,040 tweets and 6.0% market share, the jump in tweets actually corresponds to an impressive 125% hike. Its tweet ratings were also the best it has been all week on Thursday, coming in at 32.42% positive and 6.43% negative (its average for Monday to Thursday was 28.09% positive and 6.28% negative).

As I've said for most the week, yes I do think the film's ratio is going to be quite high, similar to these two comparisons but I do believe it will attract a larger portion of very young children which should suppress its ratio somewhat. That plus its search string is somewhat more tricky to zero out garbage tweets ("Karate Kid" new OR chan OR henson OR trailer OR summer OR see OR poster OR movie OR smith for Karate Kid versus "Alice In Wonderland" and "percy jackson") which will also curtail its overall ratio. It did bounce back nicely after its dip yesterday and managed to take the #2 spot for the day in overall tweets for upcoming movies, as it trailed only the behemoth Twilight: Eclipse. My prediction remains unchanged from yesterday and we should be looking at a $12 million Friday and $35.5 for the entire weekend and the #1 spot.

Now the gaudy numbers are not there for the film like Karate Kid but when comparing it to the above list of openers its clear the genre and audience this appeals to generally slots into a ratio range of 600 - 800. The weekend is a prime example of how tweet totals can be misleading if one doesn't consider the appeal of the films and all external factors. As such, all signs point to a very close race for the weekend, and my prediction stands that this will win the Friday battle with $12.2 million but lose the war of the weekend with $34.5 million.