Tuesday Evening Update: As of 9PM EST The Twilight Saga: Eclipse has secured an astonishing 243,768 tweets, shattering the old single day tweet record of 142,786 that was set by The Twilight Saga: New Moon on November 19th of last year. It is responsible for 81% of all buzz for openers <6 months away and those 2 weeks or less old (ie including Toy Story, Grown Ups and Knight and Day). Based on these very strong signs BoxOffice.com is predicting $73.5 million for the film for Wednesday.

Tuesday Afternoon Update: The Twilight Saga: Eclipse has simply exploded today to 119,234 tweets so far and is on course to crack the single day record set by The Twilight Saga: New Moon on its Thursday before release of 142,786. Huge number of tweets from overseas and within North America alike as it is currently accounting for a ridiculous 75% market share and climbing. In the meantime The Last Airbender is fading somewhat thanks to the huge Eclipse number as it has 3,245 tweets so far for 2.028% market share. Once again its the Twilight show on Twitter. Can it break the 200,000 tweet mark? 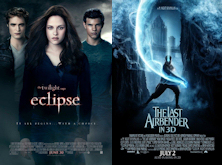 Tuesday Morning Update: The Twilight Saga: Eclipse had a whopping 84,567 tweets yesterday, for a pretty ludicrous 66.8% market share. By comparison, The Twilight Saga: New Moon had 94,789 tweets on its Monday before release, but it also had its premiere that afternoon which no doubt boosted its totals. Everyone knew this film was going to be simply massive but numbers such as these really only seem to be producible by the Twilight series on Twitter. So far today it has cranked up its buzz noise significantly also, already at more than 40,000 tweets. It is looking to beat the record for number of tweets in one day of 142,786 by New Moon on its day before release last November. Despite lagging behind by 15% last week it has really made up the gap so far this week to New Moon and it appears as though it will come much closer to the $72 million opening day record set by the former than many previously thought. A ratio in the region of 4,000 should be in order. Check back later today for the official prediction for Wednesday.

The Last Airbender also had a pretty solid day with 6,425 tweets and 5.08% market share. By comparison, Prince of Persia had 4,627 tweets its first Monday before release, Avatar had 4,040 and Iron Man 2 had 28,727. The film will definitely appeal mostly to males under 25 like Persia, though its lack of a wide International opening like the former and the Thursday bow should give it a lower ratio. Something in the region of 2,000 to 2,500 appears to be in store.

Check back later today for the afternoon update and Eclipse opening day prediction and also Wednesday to see the final Tuesday numbers analysis. Follow @AlexBOXOFFICE on Twitter for additional updates.