close
Friday numbers and final ratios for Get Him to the Greek, Killers, Marmaduke and Splice.

Twitter Watch: 'Get Him to the Greek' Leads the Newcomers 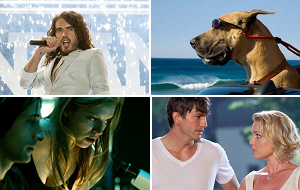 Saturday Afternoon Update: As expected, Get Him To The Greek led all newcomers on Friday with $6.3 million is sales. This led to a Twitter ratio of 1,198 from its 7,545 tweets which was very close to my predicted $7 million for Friday. The film did a good job of attracting young men with its marketing (including the release of its first five minutes on Thursday) but ultimately I believe its lack of sex appeal for the ladies (sorry Russell Brand) and lack of buzz/ratings akin to say Superbad prevented it from exploding into the $20 millions. Look for it to rake in $17.5 million over the weekend.

Killers started with $5.6 million on Friday for a twitter ratio of 766, again very close to my prediction of $5 million. As it turns out the comparison I drew most of the week between it and Letters to Juliet was almost spot on (Juliet had a ratio of 869 from its 4,344 tweets) and proved to be a great marker. While a solid opening it clearly lacking the buzz this week to push it any higher. The fact that Lion's Gate chose not to screen the movie to critics before releasing it didn't help with the preopen buzz either. Expect a weekend of $15.3 million.

As I predicted for most of the week Marmaduke floundered terribly to the tune of $3.4 million on Friday and a Twitter ratio of 361. This was almost exactly what I predicted ($3.5 million) and just goes to show that online buzz does matter, even for a heavily slanted children's release. Perhaps the studio was just cutting their losses knowing it was to be a stinker but the end result is telling nonetheless; even if you are targeting young children, the adults they belong to need to at least be remotely interested in seeing the film if you expect it to score anything more than $10 to $12 million. Many (including us at BoxOffice.com) had pegged it to be a lock for $20 to $30 million on its opening weekend when Summer previews were being prepared but with a total of $11.2 million it has become yet another casualty of the Summer.

After generating the second most buzz of the week Splice's Friday number of $2.7 million is somewhat of a disappointment. This was a ways under my predicted $4 million for Friday, and gave it a twitter ratio of 1,466. As it turns out it appears that most of the thrill-seeking fans of the Box Office stayed away and only the most die hard  filled the seats. Its ironic since the film has been very well received critically and has an Oscar-winning lead, but perhaps it tried to be too smart and less gore-filled than the often cited comparison film Species to break out. Opening against Greek and Killers also would not have helped its chances since they no doubt would have taken some of its fans. It should be able to end up with $7.2 million for the weekend.

Check back tomorrow for a full preview of next week's openers: The A-Team and The Karate Kid. Follow @AlexBOXOFFICE on Twitter for additional updates.

Tags: Splice, Marmaduke, Killers, Get Him to the Greek
Print