Wednesday Evening Update: Grown Ups is once again struggling today with 885 tweets so far for the day and 1.3% market share. This was flat from yesterday and really not a great sign for the film as I've yet to see a film with such slim growth in market share day to day. With one update left on the day it will likely come in close to or just below Couples Retreat's 1,022 on its Wednesday before release. Given its overall lack of numbers and the flat market share growth it looks like it will barely hit $10 million for Friday, expect a disappointing weekend of $28 million. Knight and Day has been doing quite well today on its first day of release, coming in with 7,655 tweets so far or 10.6% market share. Large jumps are not uncommon for Wednesday openers but a three times increase is a good sign, especially since Killers  jumped from 1,367 to 2,978 tweets from Thursday to Friday when it was released. 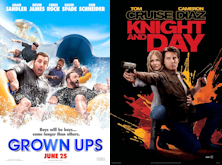 Wednesday Morning Update: Grown Ups had 815 tweets on Tuesday for 1.3% market share on the day. This represented a modest growth of 37% in raw tweets from Monday but what was more worrying was it only grew .2% market share from yesterday's 1.1%. By comparison, Couples Retreat had 938 tweets on its Tuesday before release, Death at a Funeral had 1,214 and Get Him To The Greek had 1,174. Basically all the above comparisons had better percentage growths from Monday and better numbers overall. It seems as though it is getting some of its attention siphoned away by Toy Story 3 (which had topped its own record for most tweets by an animated film today with 26,180) and also Knight and Day. This spells trouble for the film going forward as that lost attention will translate to lost dollars.

Knight and Day posted 2,438 tweets on Tuesday for a market share of 4.0%, up from 1,403 tweets and 2.6% market share on Monday. By comparison, Killers had 867 tweets on its Tuesday before release, and 1,367 on its day before release (Thursday). This number gives the film 3,841 tweets going into its first day of release which should be enough to secure $5.5 million on Wednesday.

Check back later today for the afternoon update and also Thursday to see the final Wednesday numbers analysis and predictions for Grown Up's opening day. Follow @AlexBOXOFFICE on Twitter for additional updates.