close
Friday numbers and final ratios for The Karate Kid, and The A-Team. 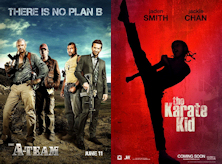 Saturday Afternoon Update: Karate Kid put an end to the run of Summer disappointments as it exceeded even the most wild of expectations with $18.8 million on Friday. This led to a Twitter ratio of 869 from its 16,510 tweets which was a ways above my predicted $12 million for Friday. I had compared it all week to Percy Jackson and Alice in Wonderland which both had ratios of ~2,000 but as its low ratio is an indication of, the film seems to have really extended to and been embraced by younger audiences under 18. With this strong appeal to families it should hold up great over the weekend and score $55 million.

The A-Team started with $9.65 million on Friday for a twitter ratio of 863. My prediction of $12.2 million was a bit too rich but in the ballpark. Its came in on the high end of the comparisons I drew during the week, with Robin Hood (890) and Clash of the Titans (824) being the closest. The writing was on the wall for most of the week that it wasn't going to be the breakout hit many had hoped for, especially Fox themselves, but the fact that it failed to beat Miami Vice or Dukes of Hazzard is very disappointing nonetheless. Its seems as though Karate Kid really took a bite out of its potential audience this weekend and left it to be content with its old fans and die-hard action lovers. It is on course for $25 million on the weekend.

Check back tomorrow for a full preview of next week's openers: Toy Story 3 and Jonah Hex. Follow @AlexBOXOFFICE on Twitter for additional updates.