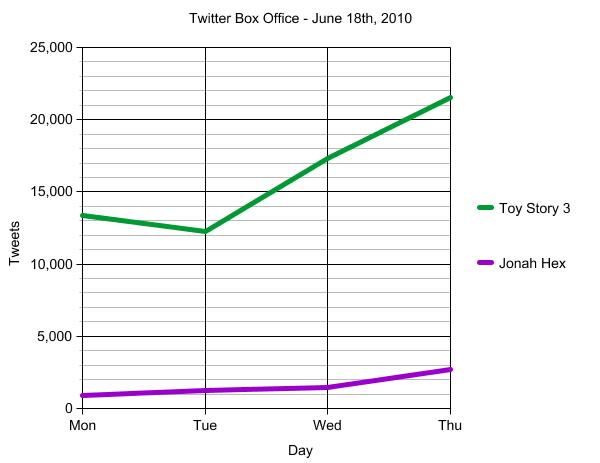 Alice is the obvious comparison here which is a great yardstick. While I don't expect Toy Story to get quite as high of a ratio, Pixar/Disney have been pushing the social media ticket, even pioneering Facebook ticket prebooking, which wil serve to ensure its well above the standard animated film region of 400-600. The buzz here has been simply spectacular considering the core demographic here is definitely children and families. It is testament to it reaching all quadrants, a recipe for a massive weekend. My prediction remains unchanged from yesterday and we should be looking at a $35 million Friday and $120 million for the entire weekend and the #1 spot by a long ways over The Karate Kid in its sophomore frame.

Jonah Hex definitely had its best day of the week yesterday with 2,721 tweets and 4.1% market share, up from 1,425 tweets on Wednesday and 2.6% market share. Despite this uptick, its overall buzz has been very sparce considering the genre and easy title to gather tweets from.

The above numbers say it all really, the comparisons chosen were all films targeting the same demographic and had easy names to narrow down tweets for (except Kick Ass which was a pain but a valid comparison nonetheless because of the comic connection). Its pretty clear it is going to have a pretty hefty ratio north of 1,400 based on these comparisons, and with quite a bit of buzz being created because of its impending failure, the ratio will suffer further. Its fitting that Jennifer's Body was the first movie I collected data on way back on September 18th of 2009, and now this film marks the 100th film tracked exactly. Thanks to Megan Fox for making bombs to help validate the power of Twitter to smell them out. Look for $3.5 million for Hex on Friday and $9 million for the weekend.

An interesting note on the above numbers is that The Chronicles of Narnia: The Voyage of the Dawn Treader scored roughly 2,000 tweets thanks to its trailer being released today, while the first Harry Potter and the Deathly Hallows: Part I trailer debuted to 3,987. The difference in demand and Box Office potential for the two franchises is ever-apparent and Twitter is no exception to the rule.

Tags: Toy Story 3, Jonah Hex, Harry Potter and the Deathly Hallows: Part 1, The Chronicles of Narnia: The Voyage of the Dawn Treader
Print