Tuesday Afternoon Update: Toy Story 3 continues to blaze a trail towards Friday as it has risen to 26.4% market share (up from 24% yesterday) so far today or 8,501 tweets. Alice in Wonderland had 14,449 tweets on its Tuesday before release and it should end up aroud that mark today also. Jonah Hex has risen to 790 tweets or 2.5% market share for the day, up from 1.5% yesterday. By comparison, Jennifer's Body had 980 tweets on its Tuesday before release, Ninja Assassin had 1,561 and Kick Ass had 1,923. 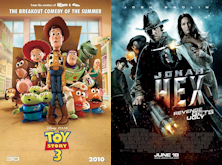 Tuesday Morning Update: Toy Story 3 completely dominated on Monday, scoring 13,389 tweets and a hefty 24.0% market share. It also continued its very positive ratings, with 29.44% of tweets being positive and a ludicrous low 1.77% negative. To put that into perspective Shrek Forever After had a positive/negative of 25.48% and 3.65% for its corresponding Monday. In terms of total tweets I definitely think the massive marketing and social media push and multi-quadrant appeal will ensure a larger ratio than standard kiddie films, as such Alice in Wonderland will likely be the best yardstick. That film had 12,001 tweets on its Monday before release. This means that Toy Story 3 now holds the record for most tweets on a Monday before release for an animated film/film targeting children, no small feat. All of this with a much more restrictive search string than Alice ("toy story" three OR 3 OR trailer OR poster OR new as opposed to "Alice in Wonderland"). I wouldn't be surprised to see its ratio come in below Alice either due to these search specifics and also since the film should have a stronger appeal to the very young. At any rate, this is a very strong showing for the film to start the week.

Jonah Hex on the other hand really struggled to a slim 866 tweets on Monday and 1.5% market share. In terms of comparisons, Jennifer's Body had 975 tweets its first Monday of release, Ninja Assassin had 1,057, and Kick Ass had 1,743. Its tweet ratings came in at 19.28% positive and 5.31% negative which is actually a great improvement over most of the past weeks where it generally hovered around 15-18% positive and 10-15% negative. It is a forgone conclusion that the film is not going to do well come Friday but to only get 866 tweets considering its favorable Summer release, target audience of 18-35 males (a hot spot for Twitter) and a unique name, is pretty poor to say the least.