Director Aaron Schneider on 'Get Low' 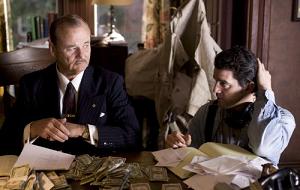 When Billy Crystal offers you career advice, you take it.

Aaron Schneider learned that during a family vacation in the middle of his sophomore year at Iowa State University.

Schneider's GPA as a mechanical engineering student wasn't flagging. He just didn't think the field offered the kind of creative outlet he craved.

Enter Crystal, who Schneider ran into by chance on that fateful trip

"He recommended film school," Schneider recalls. "He said there are so many different facets to filmmaking you might discover something else."

The young director's first film, Get Low, stars Robert Duvall as a cranky old timer who wants to plan his funeral while he's still breathing. Bill Murray plays a funeral director eager to collect the old man‘s cash--even if he has to break a few rules in the process.

Schneider, who began his post-school career as a cinematographer, used a simple technique to lure the reclusive Murray into the fold.

He poured his heart out to the Lost in Translation star in a letter.

"The only shot you've got with it is to be honest. I told him why I wanted him to be in the movie and my hopes for the film, and I let ‘er rip," he says.

Landing Duvall proved less complicated. The Oscar winner was already circling the project when Schneider came on board. Schneider marveled at how easy Duvall made it look on the set.

"It's almost like there is no process for Bobby. He's thought about what he wants to do, he does it, he's done," Schneider recalls. "Because his choices are so real and simple some times, you don't really appreciate them until you put it up on the screen and you realize he's known all along what he wanted to do."

Murray, who often blames laziness for being so choosy with his film projects, proved tireless on the set.

"He never likes to do the same thing twice, always exploring, always riffing. It's a little like jazz. He's always looking for the one little rhythm or noise," he says. "There seems to be a very musical quality to the way he goes about doing what he does."

Murray can be outrageous on screen, no doubt, but he bought into Schneider's restrained comic vision.

Not that the first-time director wanted Murray to cut loose in his film a la Ghostbusters or Meatballs.

"I have no compass for [broad comedy] at all," he confesses. "Comedy is about restraint."

Schneider brings an extensive resume as a cinematographer to his first directorial effort, as well as an Oscar for the short film Two Soldiers. But he's still learning the ropes about how social marketing can pump up ticket sales.

"I don't Twitter, I don't even know what it is," he says, but adds he routinely sends images taken from his iPhone and other film-related content to the folks who oversee the Get Low Facebook page to keep film fans in the loop.

"You're hoping between Sony Pictures Classics efforts, marketing and word of mouth that it'll create a life for itself [for the film]," he says.