'Due Date' Trailer Results in Solid Levels of Online Activity 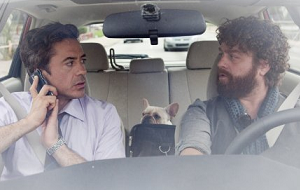 Now that moviegoers have had a few days to digest the trailer for Due Date, it's clear that the response is healthy, but not overwhelmingly strong.

Due Date holds a 3.29% market share of online opinions according to the most recent WebWatch report for unreleased films. That puts the November release ahead of films that will be released in July such as Ramona and Beezus and Dinner for Schmucks. It also ranks ahead of The Other Guys, a comedy set to open in August. In the WebWatch theatrical trailer report, Due Date is in 4th place behind The Social Network, Devil and The Town.

Considering that Due Date is from The Hangover director Todd Phillips there are bound to be comparisons and high expectations. A letdown is almost inevitable since The Hangover's $277 million domestic haul makes it the most successful R-rated comedy of all time without adjusting for inflation. Due Date has a shot at beating The Hangover's $45 million opening, thanks in large part to the fact that star Robert Downey Jr. is at the peak of his drawing power. After that, its staying power will depend on how much other adult-skewing fall releases such as Morning Glory and Love and Other Drugs chip away at it.

This trailer marks a good start to the campaign Warner Bros. is building. With such skilled actors as Downey Jr., Zack Galifianakis and Jamie Foxx on board, the studio is probably sitting on plenty of great footage that it can let loose in future trailers closer to the film's release.