close
FEATURE: The latest Julia Roberts vehicle is hoping to entice moviegoers by using a technique that is usually reserved for children or teenagers. 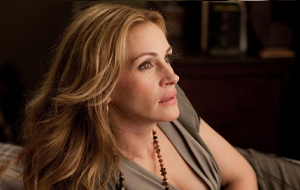 They can always slap their logo or characters on a Happy Meal box. And that's never more the case than during the summer blockbuster season.

Studios have been reaching out to burger chains for decades as a way of letting kids know about their upcoming popcorn films. Just remember the Star Wars glasses Burger King peddled year after year.

But do adults respond in a similar way when they see a film mentioned on a product they pick up in the store?

On July 11, the World Market chain, also known as Cost Plus, offered a free tote bag emblazoned with the name of the new Julia Roberts movie, Eat Pray Love with a $10 purchase.

Robert Marich, author of "Marketing to Moviegoers: Second Edition," says the minds behind the marketing project hope the tote bags work as "walking billboards" for the film, set for an Aug. 13 release.

"It can't hurt. Every little bit helps, and it seems like a good fit with the movie," Marich says, since the retailer sells handmade imported items and other merchandise.

But this kind of promotional push comes with extreme limits.

"The bad news is you won't get the tonnage you need, the mass distribution. It's a specialty store chain," he says. "There won't be enough in circulation."

"You need impact, a fast load. Something that gets out there in a hurry ... you've got a 4-8 week shelf life for the movie," he says. "These tote bags could [still] be on the on street next year. What good is that?"

That doesn't discount the modest boost in awareness it might have.

It's a "low risk, low yield" marketing effort that's part of a much bigger push for the film, he says.

Marich says it's rare to see marketing tie-ins like this aimed at more sophisticated films. But it's usually the studios who avoid these kind of deals.

"Retailers want to latch on to movies. They're looking for a good fit," Marich says.

The campaign's effectiveness will be hard to measure, he says, adding the chain in question isn't found in every city like a Wal-Mart

Pace University marketing professor Paul Kurnit sees the campaign as a smart tie-in to themes integral to the film's story.

The movie, based on the popular book, follows a woman (Roberts) forced to re-examine her life after the dissolution of her marriage.

"Eat Pray Love in a tote says a woman is a searcher, in touch or looking to be in touch with all she can be," says Kurnit, author of "The Little Blue Book of Marketing: Build a Killer Plan in Less Than A Day."

Kurnit thinks the tote bag will be a hit with the film's demographic.

"Yes, Happy Meals can work for adults, too. It all depends on the prize inside, or the special offer that makes us feel good," he says.