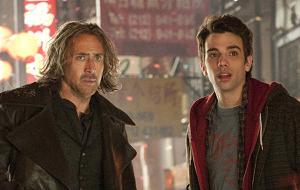 According to the most recent WebWatch report, The Sorcerer's Apprentice failed to pick up Internet momentum in the crucial days leading up to its release. The Disney/Jerry Bruckheimer production boasts only a 3.33% market share of opinions, meaning that it trails the likes of Salt, Charlie St. Cloud and Scott Pilgrim vs. the World. Inception holds a dominant 28.49% share.

Despite a rush of TV spots and other forms of publicity, Sorcerer's Apprentice simply hasn't connected in a big enough way to deliver the kind of blockbuster opening that is expected from any of Disney's summer releases. The combo of Bruckheimer and star Nicolas Cage is usually a winning one, but all signs are pointing to a serious dud here.

The lack of interest in Sorcerer's Apprentice could very well be a result of plenty of other viable options for family audiences in theaters right now. Despicable Me opened beyond expectations and is bound to have a healthy sophomore frame, while Toy Story 3, The Last Airbender and even The Karate Kid are still going strong.