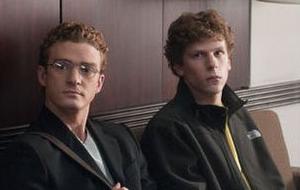 Judging by the recent increase in online activity, the trailer for David Fincher's The Social Network is a hit. Sony released the trailer online last Thursday, and it also played in front of Inception.

According to the most recent WebWatch report for theatrical trailers, The Social Network holds a dominant 23.98% share of opinions with 926 positive opinions vs. only 69 negative ones. Additionally, the film ranks in second place among unreleased films with a 7.40% share of opinions.

The new trailer came quickly after two teaser trailers were well received, and the challenge now will be to maintain this initial burst of interest until the film hits theaters on October 1. With Facebook in the news every day, the film is bound to get a ton of free publicity.

When it opens on October 1, The Social Network will be facing off against Let Me In, a remake of the Swedish vampire flick Let the Right One In. Let Me In will obviously be aiming for a piece of the Twilight crowd, while The Social Network comes across as a serious drama that will mostly appeal to adult moviegoers. Although, the presence of Justin Timberlake in a key supporting role may help bring in some teenagers. With around 500 million Facebook users across the world, Fincher's film has a lot of potential viewers.