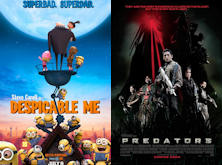 Wednesday Afternoon Update: Both Despicable Me and Predators have seen solid bumps today so far with the former increasing to 6.0% market share so far today (4,034 tweets and counting), and the latter rising to 4.2% market share (2,804 tweets so far). Predators has had the bigger rise of the two films today but still trails in total tweets by quite a margin on the overall number.

Wednesday Morning Update: Despicable Me saw a very solid bump to 4,029 tweets and 4.6% market share on Tuesday, up from Monday's 1,534 tweets and 1.2% market share. By comparison, How To Train Your Dragon had 1,701 tweets on its Tuesday before release, Shrek Forever After had 1,939, while Marmaduke had 231. Again these numbers are eye-opening and a bit of a head-scratcher at the same time. In looking more closely at the data it was actually trending for a while on Twitter yesterday with always provides a bandwagon effect. A rebranded customer search page for Google was announced for the movie (http://www.gru-gle.com), complete with 10 different themes. A Steve Carell interview and Jason Siegel appearance on Leno also generated a lot of buzz. Universal has been promoting the film online through clips, numerous trailers and its own Twitter account pretty strongly which has really helped its buzz grow. Also, add the fact in that part of the last trailer (It's so fluffy I'm gonna die!) is starting to catch on as an internet meme has also greatly helped its buzz. All of this hype will no doubt drive up its ratio, but the level of awareness amongst young audiences is clearly evident, just a matter of if it will be able to bring in the wee ones and their parents.

Predators increased to 1,866 tweets and 1.5% market share on Tuesday, up from 1,623 tweets and 1.3% on Monday. By comparison, A Nightmare On Elm Street (2010) had 2,977 tweets its Tuesday before release, Splice had 752 and The Wolfman had 1,346 and Daybreakers had 1,152. Not the greatest of jumps from Monday but nothing to be overly concerned with, however, the distance that Despicable Me is putting on it pretty much secures its slot as the #2 new opener this week. Very difficult to see it outgrossing Despicable given these numbers as their ratios will at the very least be on par.

Check back later today for the afternoon update and also Thursday to see the final Wednesday numbers analysis. Follow @AlexBOXOFFICE on Twitter for additional updates.