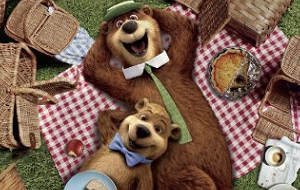 Yogi Bear certainly has its work cut out for it since it's opening on December 17, the same day as TRON Legacy. The latest TRON trailer inspired great reactions online, while Yogi Bear is off to a weak start. Luckily, with theater chains expanding their 3D capabilities at a healthy pace there should be room for two major 3D releases during the same weekend. There won't be too much overlap between the two flicks, because TRON's trailer plays as dark and brooding and that may keep families with young children away.

Yogi Bear opens a week after Chronicles of Narnia: Voyage of the Dawn Treader and Gulliver's Travels hits theaters on December 22. Both of those films will dilute Yogi's audience slightly, but there's always a need for family entertainment during the holiday season. It'll be a case of healthy competition.