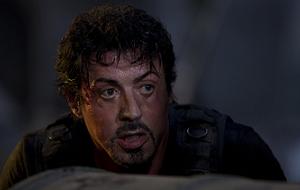 According to the most recent WebWatch report, The Expendables holds a 13% share of online opinions among unreleased films. That puts the action flick ahead of Scott Pilgrim vs. the World (12.29%) and Eat Pray Love (7.26%).

Expendables also boasts a dominant 24.57% share of online opinions about casts. New TV spots for the film have been playing up the presence of Bruce Willis and Arnold Schwarzenegger, and they are obviously connecting with their target audience.

So much for August being a dumping ground. After the successful opening of The Other Guys this past weekend, we're headed for a competitive weekend in which three films could open with more than $20 million. The fact that Expendables has an edge when it comes to online conversations is a very good sign. Eat Pray Love is still the favorite win the weekend, but Expendables is looking like it could beat Scott Pilgrim.