close
FEATURE: Lionsgate's new horror flick will try to entice the same crowds that turned out in droves for Paranormal Activity and The Blair Witch Project 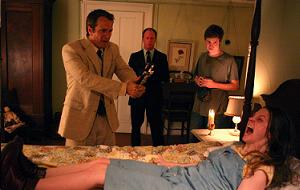 Can lightning strike three times in a horror sub-genre?

The no-budget Paranormal Activity and The Blair Witch Project used a "found footage" gimmick to create fresh scares. Audiences lapped up the concept, turning the films into money-making machines.

Now, The Last Exorcism will try to duplicate the formula.

The new horror movie, produced and presented by horror director Eli Roth of Hostel fame, tells the story of a preacher starring in a documentary about exorcisms. He's been conducting fraudulent exorcisms for years to make a quick buck, and now he wants to document just how phony they are to clear his conscience. But his final exorcism, the one he hopes to capture on video, may just be the real deal.

The film consists of documentary reels spliced together, an offshoot of the "found footage" sub-genre that allows for more creative tinkering than the aforementioned films. It still hews closely to the single camera format, one that would seem both confining and difficult to master. Yet we‘ve already seen it work wonderfully twice.

That's not the whole story, says Tim League, founder and director of Fantastic Fest in Austin.

It's League's job to screen hundreds of movies in order to find the 65-70 films to play each year at Fantastic Fest, the largest genre film festival in the country.

Many entries try to copy the Blair Witch/Paranormal model since it requires little in the way of budgets or acting experience. The general public simply never gets the chance to see them - and with good reason.

"They're derivative and not well done," he says. "Paranormal Activity happens to be an exceptional version" of that brand of filmmaking.

That film came roughly a decade after Blair Witch, while The Last Exorcism's Aug. 27 release is roughly a year after Paranormal hit theaters. But League isn't worried this sub-genre will burn out.

"You can draw on a parallel to another horror genre. 'Oh, can we possibly have another zombie film?' Night of the Living Dead came out in 1968 yet Zombieland came out last year and does incredibly well."

"As long as the filmmaker has a way of delivering a great story, you can continue to work in whatever genre and material you want," he says.

Tony Timpone, editor emeritus of Fangoria magazine, predicts Exorcism will be a smash at the box office given the past success of films like The Omen (1976) and The Exorcist (1973).

Timpone says these horror classics have shown audiences have "an enormous appetite for films about demonic possession and Satanism."

The mock documentary angle will only help, he adds.

What Exorcism has that the previous "found footage" films lack is a terrific lead performance, he says, crediting actor Patrick Fabian‘s work as the conflicted preacher.

Fabian's performance aside, the new film will shock viewers because it doesn't feel like your average slasher film.

"Moviegoers are still bewitched by this no-frills, realistic aesthetic," he says. "These movies appear ‘more real' than conventional horror films and thus are more frightening to today's audiences."