on September 15, 2010 by Patrick Corcoran
Print

It was just under five years ago that Disney released Chicken Little on an unprecedented 84 digital 3D screens, and look where we are now.

The sky is falling.

You could be forgiven for believing that if you've been reading recent articles in the trades or following the blog posts of Wall Street entertainment industry analyst Richard Greenfield. It seems that in the half-year following the spectacular 3D performance of Avatar ($749 million, an estimated 80 percent of it in 3D), we, as an industry, have blown it.

In a blog post from May 24th titled "Is the Novelty of 3D Wearing Thin as Ticket Prices Continue to Rise?", Greenfield wielded data from DreamWorks Animation's last two films to raise alarms about the declining percentage of box office from 3D:

(T)he most interesting aspect of the movie's under-performance this past weekend was its level of 3D box office relative to total box office. Shrek's 3D box office percentage declined notably from DWA's last film, How to Train Your Dragon, despite a higher number of 3D screens (both IMAX and non-IMAX). In fact, it appears that the average ticket price paid by consumers actually declined from How to Train Your Dragon, as a greater percentage of consumers simply opted to see the film in 2D.

Are Ticket Prices Simply Too High? With the economy still recovering, we worry that movie exhibitors' view of consumer demand for 3D is disconnected from reality. We believe lower ticket price premiums would drive more people to 3D, and mitigate the risk from alienating consumers when they see a "bad" movie in 3D and feel like they wasted money on the premium ticket.

On July 1st, Greenfield returned to the topic in a post titled "Dear Movie Industry: Should Boise Consumers Really Spend 53 percent More to See Last Airbender in 3D?" to make this point: "Movie Exhibitors' Approach to 3D is All Wrong-Pricing MUST Come Down." (Bolded and underlined in the original.)

He bases this conclusion on the opening weekend grosses from a total of five movies.

Let's look at the numbers. I've added two movies that have opened since Greenfield's posts (The Last Airbender and Despicable Me) that may seem to reinforce his warning.

Over time, we see what Greenfield sees: a decline in the percentage of grosses from 3D. It ticks up again, slightly, but the downward trend is evident.

Let's look at them in a different way. 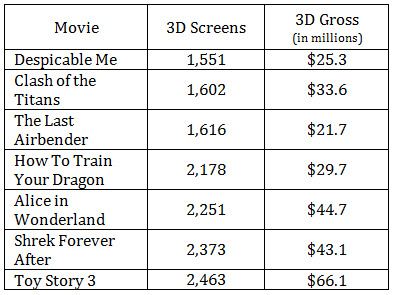 In a far more striking correspondence, the raw 3D grosses (with the notable exception of Clash of the Titans) increase in lock step with the increase in the number of 3D screens the movies played on. What this also tells us, oddly, is that Clash's much-maligned 3D version overperformed given the number of screens it played on.

In other words, Greenfield has identified a phenomenon that is real--a decline in percentage of box office for 3D screens despite an increase in their number--but that might be irrelevant.

Greenfield makes some important points. Our patrons are price-sensitive, and part of the movie theater's appeal to consumers is that we provide affordable entertainment for families. And we do. Even with Avatar's 3D grosses thrown into the mix, the average ticket price for the first quarter of 2010 was $7.95-which is less, adjusted for inflation, than the average ticket price in 1970 ($1.55, which would be $8.72 in 2010 dollars). This is an important customer perception for our industry and should not be set aside lightly.

There is also the issue of quality. 3D has been presented to the consumer as a "premium experience." This sets up an expectation in patrons' minds that is largely out of theater owners' hands. We can ensure that our technical presentation is of the highest caliber and our customer service is friendly and courteous, but the quality of the movie is both a subjective judgment and under someone else's control.

Going forward, it is important to consider what we expect 3D to mean to movie theaters and to our audience.

As a business proposition, 3D's most ardent evangelists believe that 3D is the future. Someday, every movie will be 3D, because that is how we perceive our world. That, to some degree, was how Avatar was marketed. It was "hyper-real." But I don't think that is really the case. Our brains already work in 3D and use clues of light and shadow, size and focus, to judge distance and perceive shape and depth. We understand these same qualities on a flat screen through artful use of those same elements. The movie theater does not feel the lack of 3D the way it missed sound or color from silent or black and white movies.

It is, however, bringing something new, and that, I think, is what made Avatar such a sensation. James Cameron gave his audience something they had never seen before-or in such a way-and he made it beautiful, thrilling and plausible. That was the other element that made it essential viewing in 3D-more so than any movie before or since.

The marketing of Cameron's movie was inextricably bound up in 3D. Nearly every mention of it in the press underscored that it was a 3D event. That 80 percent of its box office came from 3D shows that approach worked. And since the onslaught of Avatar, not one other movie has been marketed to audiences as essential viewing in 3D.

As an industry, we still don't know what 3D is or what it's supposed to be. If it is a premium experience, how is that premium to be maintained as a business proposition for theaters and as an experience for our patrons?

From an audience standpoint, Greenfield may be right that "bad" 3D movies will be more damaging to the brand of 3D than a "bad" 2D movie is to moviegoing in general. If an experience is marketed as premium, it had better be, well, premium.

Going forward, distribution and exhibition have some hard questions to answer. As of July there were 4,871 3D screens at roughly 2,500 theaters. At the current rate of growth we can expect to see 6,500 to 7,000 3D screens by the end of the year- about 17 percent of the total U.S. screens. How many is enough? Can an experience be premium if you can get it anywhere?

The same question applies to the number and kinds of movies that will be made in 3D. If every movie is in 3D, how can we maintain that it is a premium experience? Doesn't that require that every movie also be offered in 2D?

In the shorter term, how many 3D movies will the market support? There will be a milestone of sorts December 17th, when two wide 3D releases--Tron: Legacy and Yogi Bear--open the same day. That's two of the 25 that will have been released in 2010-and 3D is still in its infancy.

What we make of the 3D space means having to really think through what we want it to be. The decisions must fall to us, or like Chicken Little, they'll fall on us.