A New Rush of Suspense Films Look to Trap Moviegoers 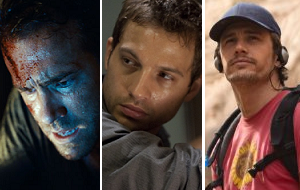 No one likes to be trapped in a tight space.

This Fall, three separate movies will use that collective fear to entertain us - and maybe give us nightmares for weeks to come.

Consider Buried, the new Ryan Reynolds thriller about a man trapped in a coffin after getting ambushed in Iraq. Then there's Devil, the story of five people on a stalled elevator who slowly realize one of them may be Beezlebub himself

Finally, 127 Hours by Oscar-winning director Danny Boyle, recalls the true story of a mountain climber (James Franco) who gets trapped under a boulder in Utah and must take extreme actions to free himself.

Is it a coincidence all three films are hitting theaters in the coming weeks, or does the trend speak to something else in popular culture?

"Today's film directors are trying to find their inner Hitchcock," Medved says, hearkening back to confined thrillers like Rope and Lifeboat, an adventure with a modest setting. "Directors must do a ‘Hitchcockian' job of inspiring fear without much action going on."

It helps to cast actors who can command the screen despite the limited locales. Sometimes, a single actor has to carry nearly the entire film's emotional load.

"You need a star who has that kind of screen presence that can last for a hour and half. They better be pretty magnetic," he says.

And actors often jump at these kinds of parts.

"The actor gets the chance to run the gamut of emotions in tight quarters ... they're more in control of the project. It's more like a stage play," he says.

And, let's face it, a film shot in one elevator or canyon crevasse is much cheaper to make than a movie spanning continents.

"These high concept, low budget thrillers hope to achieve the same thrills at their big budget, counterparts," he says.

"All you have to do is go back to Edgar Allan Poe's ‘The Premature Burial‘ to get a strong taste of the history for this type of fear factor," says Toth, adding Buried can be considered an off-shoot of this classic yarn.

Even the most emotionally grounded movie goers can be jolted by the thought of being helpless and confined in a narrow space, he says.

It's too soon to tell if Hollywood will start cranking out more films of this bent. The box office tallies will tell the tale. But Toth says horror movies remain a legitimate way for audiences to explore their own anxieties in a safe setting, especially in economically uncertain times.