close
FEATURE: We caught up with the 'Jackass 3D' star 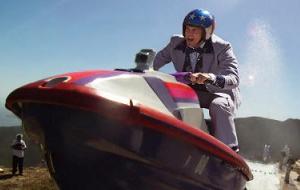 When you're about to do a dangerous stunt--say, blasting across a lake on a homemade rocket--when does reality sink in? When you see the giant rocket, when you're getting strapped onto it, or those last seconds before it explodes?

You kind of start wrapping your head around it on the way to set. You've been thinking about it for the couple days before, but you really start focusing in when you're heading to set. It does help when you arrive and see it there, and then right before I usually do a stunt, I'll go off and sit in my car and listen to music. That helps me escape the reality of the stunt, a little. The music helps you relax and focus, and then after that, it's just, "Eff it!" Or, "Oh, well!" There's not much to do--"There goes this suit!"

When you're Johnny Knoxville and you're walking down the street, how do fans show their excitement? Throwing bricks to see how you react?

Most people just want to shake my hand or give me a hug. There have been times when guys--or girls--will punch me. That's no fun. There's been some times where they go, "Oh, you're Johnny Knoxville? Watch this!" And then they'll go run into a streetlight or something.

You credit the birth of your daughter Madison when you were 24-five years before Jackass launched on MTV--with motivating you to find yourself a career.

I did have that feeling of, "I guess I'm having a kid. I better do something." I think that's natural for a man who's having a kid. I had that same feeling this year when my son Rocko was born, but I'm in a different place. I didn't have a career when Madison was born. It did feel like a jumpstart to find something I thought I could do.

Are you tempted to raise Rocko the way Buster Keaton was raised, where his parents tossed him around on stage as a baby to toughen him up and teach him physical comedy?

He was raised in vaudeville--I read about all that. And no, no. I don't want Rocko doing stunts. He can do pranks. No stunts.

For this movie, you had a sober set. Did that change the atmosphere?

Last movie, we had beer on the set every day. This movie we didn't. It was different in that manner, but the guys really wanted to support Steve-O in his sobriety. When we traveled, he had a sober person who sometimes traveled with him, a rental car so he could get to sobriety meetings in whatever city we were in. He wouldn't go out at night. We would go out at night to the bars, but everybody tried our best to not bring it around Steve-O. It was a different set, but it was good. We can not drink during the day--c'mon guys, we can do that, right?!

Rocket scientists manage not to at NASA.

Yeah, and we're not much different.

What separates Jackass from America's Funniest Home Videos? Both have a lot of shots of people falling down or getting slammed in the crotch.

Aw, man, I love America's Funniest Home Videos! It's a great show. It's one of the few times I laugh out loud is when I watch that show.

Jeff [Tremaine, director] brought up the idea of 3D cockage. Were the guys comparing each other's and worrying that they might not measure up in 3D?

As for yourself, you've got a crop of features rumored as future projects. What can you tell me about this untitled superhero movie with Gerald Butler, Hugh Jackman, Uma Thurman, Kate Winslet, Kieran Culkin, Emma Stone, Justin Long-?

Which one? Oh that one! The Farrelly brothers are producing it. Seann William Scott and I did this little thing that Brett Ratner directed. I kidnap a leprechaun for my roommate Seann William Scott for his birthday. Not his birthday! I have sex with his girlfriend and I want to make it up to him, so I kidnap a leprechaun to give him some gold. Pretty violent things end up happening. Those poor leprechauns!

After high school in Tennessee, you moved out to LA to become an actor. Are you glad now that back then you didn't get a small part in Dawson's Creek that might have distracted you from your calling?

I never think about stuff like that. If I start thinking about what could have happened or what might happen, that would push me over the edge.

A nervous wreck. I had sweat stains from one armpit to the next--they'd almost meet in the middle of my chest. A very excitable boy.

What made you so nervous?

Does that guy seem a million miles away?

I still don't have any fingernails. And I am still pretty excitable...in places.