Battle of the Teen Sensations: Will Justin Bieber Beat Miley Cyrus at the Box Office? 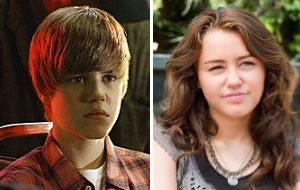 On February 11, a rush of screaming teenage girls will flock to see Justin Bieber: Never Say Never. Based on early enthusiasm for the project, there's a very real chance that the Paramount release will do better business than Disney's Hannah Montana/Miley Cyrus: The Best of Both Worlds Concert Tour.

In a prime example of counter-programming at its finest, Hannah Montana delivered a whopping $31.1 million opening from only 683 locations during 2008's Super Bowl Weekend. Even though it was billed as a limited engagement, Disney wisely extended Hannah Montana's run and it ended up with $65.3 million domestically.

"I'll call it now: Justin will crush Hannah," says Eric Ditzian, senior writer at MTV News. "The kid has shown that not only will his fans follow his every move on Twitter, but they'll fork over their parents' cash for his concerts, his merch, and his albums."

Hannah Montana's financial prospects were limited by the amount of 3D screens available in 2008. That won't be a problem for Bieber's film, which is bound to end up playing at more than four times as many locations now that the digital transition is progressing at a healthy pace.

Never Say Never's trailer is already a huge hit. It has recorded 25,508 likes and a whopping 4,386 comments on Bieber's Facebook page as of today at noon PT. On Twitter, Never Say Never is generating more tweets than a lot of 2010 releases.

Fandango.com and MovieTickets.com have already marked their calendars for what's bound to be an onslaught of frenzied fans looking to avoid sold-out showings.

"Teenage ticket buyers have had significant box office clout in recent years, particularly with music-based films including Hannah Montana and High School Musical 3--both of which are in the MovieTickets.com Top-25 Advance Ticket Sellers of All-Time," states Joel Cohen, CEO, MovieTickets.com. "We hope to see similar success with Never Say Never, considering Justin Bieber's incredible popularity and built in fan base."

"It's all about celebrating your passion with a theater of like-minded friends, and it's cheaper than actually going to a concert," adds Chuck Walton, senior content manager for Fandango. "These movies tend to see brisk ticket sales because of the buzz factor; every Justin Bieber fan wants to be the "first on his or her block" to have a ticket."