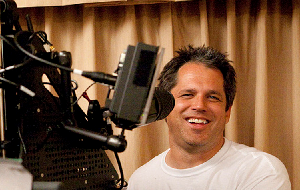 You shot 80 percent of the film on actual 3D cameras.

At least 80 percent. We did have 2D cameras with us because I always want to be ready for when it gets spontaneous and spins out of control--the 3D cameras are bulkier than our normal set up and I didn't want to miss out on our normal chaos. But for the most part, we were pretty good about wrangling all the action to stay in front of the 3D cameras. That was an accomplishment on our own.

It's great you made the effort as audiences are learning to distinguish between 2D conversion and quality 3D.

I think you can really feel the difference. We're really happy with the choice. Me and Knoxville were real leery of it, at first. I was even more open to shooting it in 3D than he was. My only reason was I liked naming our third movie Jackass 3D.

It just seemed to make sense. But we did some conversion tests and then we shot with two different 3D crews. On those two test days, we learned we actually could shoot in 3D and we thought the 3D would look more spectacular if we shot it that way. We went for it.

How did that change the way you work on set?

It added a lot of people to our crew. Already in our movies, the line between cast and crew isn't very strict-even normally when we're shooting, we'll pan over and you'll catch a cameraman in the shot because that's just how we do things. We're not professionals. So having the bigger cameras and everytime made that line a little harder to bleed over. And even so, we put the 3D cameras in high risk--we didn't end up destroying any of them, but we did break a couple that needed to get fixed.

After three films and a decade on TV, when will you feel like a professional?

Man, it's hard with this crew. It's funny enough that they call me a director, but when you get down to our director of photography and everyone else ... hopefully it never feels too professional.

The big talk in 3D earlier this year was proscenium-style camera work where it's all about the depth behind the screen. You're going back to the '50s schlock style of 3D, but instead of having a yo-yo pop off the screen, you've got a guy blowing a paper party horn with his, um, bottom.

We've got a lot of cool stuff coming off the screen--we're not sticking too much to the 3D rules. They say, like, if it hits the screen then you gotta make that the screen depth. Fuck that! If we want it to jump out, who cares? No rules for us! We're breaking the laws of physics to make it look cooler in 3D-that's all we care about. But we've got some cool deep stuff, too-it's not all in your face.

I know you like to hold off and surprise the audience, but what are some of your favorite 3D images in the film?

I don't want to give away much more than what's in the trailer, but we have a spectacular opening and closing sequence. They're not real Jackass stuff--they're goofy, but cinematic. And huge. Beyond that, we made three of the cast members cry.

I hope their tears are nice and fat in 3D.

They are, in a good way. We all love each other. And we love to pick on each other. We have a fighter jet-a huge wind machine-and we threw everything we could behind the thruster to see what would happen.

Inspired by the old Maxell ad, yeah, with the guy in the arm chair getting blown away?

We did that, and we threw a bunch of other crap behind it, too. The whole idea was first based on me wanted to tether a guy to a pole in one of those kite suits and we'd wait for a hurricane to blow. As soon as the wind got up to 100-150 miles, he'd open up the wings on the kite suit and fly. But we could never get that shot during hurricane season-we kept missing our chance. We had to create a fake hurricane. And then it turned out that the kite suit idea didn't even work in the first place. We shot it, but it didn't work. But a lot of the other stuff we threw into the jet engine looks pretty cool.

You brainstorm a lot of the stunts-where do you get your inspiration?

Oh, man. The ideas come from a lot of different places. I love coming up with ways for different animals to attack. It's amazing. Animals will perform for you if you give them the right target. And I think animals like working with us because they don't have to fake it-they get to really be mean to humans, which a lot of them like to do.

I pity the people who hire the bear next after it's gotten a taste for blood.

Yeah-a lot of animal trainers probably don't like us, but the ones we work with do because it's fun for them to turn their animals loose and let them bite someone. We have a lot of fun animal attacks in this new movie. But as for inspiration, it sort of goes back to cartoons.

I'm convinced when Knoxville watches Tom and Jerry, he thinks he's watching reality television. He had this idea to make a giant hand that swings and smashes people--that was his thing--and I had a lot of doubts that it was going to work. There's no way that that hand is going to move fast enough that targets aren't going to see it coming! But he said, "Nah, nah, trust me-they can do it." And sure enough, we found these guys who built it for us. We hid it in the kitchen and our guy walked up to it and [laughs] it worked out.

Have you ever come up with an idea that you've had a hard time describing and you almost got to do it yourself to show people what you mean?

I've been good enough explaining them that I haven't had to do any myself. I try not to do any of it myself, but I do get caught out there now and then. I try to stay behind the camera as best I can. I don't feel pressure to get out there.

But part of the fun of Jackass is the guys saying they won't do something and then changing their minds. Do they pressure themselves?

What's your mental strategy? The Art of War?

You know, each guy has a different weakness. You've got to prey on their weaknesses. I have a few different techniques. I'll do the ol' bulldog where I'll physically make them do it, or I'll sweet talk them into it or I'll bet them money-whatever it takes. Ultimately, the guys are vain enough and competitive enough that for most of the ideas, there's someone willing to do it. But we will write ideas and not use them-you never can guess what's going to be the best thing in the movie. This one has a Porta John that gets bungeed up in the air-that bit was because it's our ten year anniversary and I wanted to revisit the first thing we ever shot with MTV's money and put a new twist on it. And that was Knoxville getting into a Porta John and having a trash truck flip it over. It was called "The Poo Cocktail." So we wrote an idea called "The Poo Cocktail Supreme," where we'd attach bungee cords to the Porta John. I just wanted to throw it off a bridge or a building, but it turned out to be more practical-and ultimately funnier-to build a weird slingshot-style bungee. That's a lot more violent because it's shot up and then still has the downward bungee, so it made a better cocktail.

And that was one of those bits where I didn't have a whole lot of confidence going into it that it was going to be funny. But when I showed up at set and saw how high the cranes were and how grand the slingshot was, then it dawned on me how funny it was going to be. And then the poo smelled so bad with this wafting wind blowing through that our whole crew was falling off and puking. It was a crazy day and it turned out to be one of the best things in the movie.

You mentioned at Comic-Con that the most expensive shot in the movie might not even make it in--did it?

The most expensive thing is now the closing. We made it a whole lot better. We went and reshot it, basically, so it got even more expensive then it was at Comic-Con. Right now, we're just trying to get it past the MPAA. There's lot of 3D penis in this movie right now. We're scaling it back a little bit.

I hope you don't mean by making them shorter-that could insult someone's masculinity. You recently got married. What do your in-laws think of what you do?

I don't think they love the movies, but they're supportive of me. I've got cool in-laws.

What's next for you? Jackass 4 with Smell-O-Vision?

[Laughs] Check in with me in four years and we'll see if we can make that happen. But next is probably something scripted--I'm still looking for a script that I like. And more documentaries. I enjoy making them. There's a few ideas right now that we're pursuing.

What other television show do you think deserves to be made into a movie?

I can only say one of mine. I would love to make Wildboyz: The Movie if someone would give me money for it!