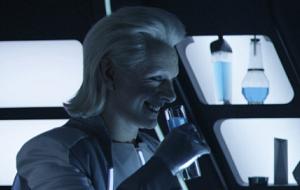 You were 11 when the original TRON came out-what do you remember?

I really remember it. I went to a cinema in the next town from me called Neath. My uncle Russell took me. It was an afternoon--a weekday afternoon, so it must have been during the holidays. I always find it quite exciting to see a movie in the afternoon. Something more magical about it.

You walk out into the sun after, and where you've been seems more abnormal.

Exactly. I remember coming out after and I'd literally never seen anything like it. It did everything that you want a film to do when you're that age: just take you to another world and completely transform your world when you come back to it. Coming out of the cinema, the world was different. The world was changed. That has a huge affect on a kid, so I've always had a strong relationship to Tron and I've watched it many, many times since. Obviously, it doesn't have the same impact as it had when I was 11, but nevertheless, I still have a huge affection for it and I still think the look of it, the design of it, is amazing and still stands up now. If I could time travel from today and go back to that cinema and tell myself, "In 28 years time, you're going to be in the sequel," it'd just be amazing. It feels that way now. There's still the 11 year old in me who can't believe I've been drawn into the computer world just like Jeff Bridges was in the first one.

Was the 11-year-old you into video games?

Video games at that point were literally Pong. It's hard to convince of now-things have changed so much. I remember my neighbor saying, "Come in--I've got an Atari. You're going to be blown away by this!" And I sat down and I thought, "This. Is. Wow." I'd never seen anything like this before. There were two white dots knocking another white dot around on the screen. This is the future. This is crazy. My brain's going to explode. And then my mum worked at a company called Dragon, which was a Welsh computer company. They had a thing called the Dragon 64, and she brought it home so I could play games on it. They were a little bit more advanced then Pong, and then in a few years, everything changed. We had Donkey Kong and Super Mario. But when they made this film, there must have better games around--they just hadn't come to Wales. I heard they were playing Battlezone on the set of the first Tron film, but that hadn't reached me.

Your scenes take place in a nightclub, so you got to walk onto an actual set.

Most of the actors just had to be on blue screen the whole time, whereas I had a massive set with thousands of extras. It was a different experience for me--it was more like a regular film or a theater where you've got big sets. I didn't have to do any acting in a room on my own. It was amazing to be a part of the TRON world that was recognizable and nostalgic, but yet it wasn't the old TRON--this is new TRON. So there was a bit of a mind meld.

Tell me about the creation of your character Castor. He's inspired a bit by David Bowie, but he's a program that was developed in the '80s at the height of Poison and glam metal. Did you consider making him more like Bret Michaels?

There's a real enjoyment in one scene in the film where Gareth switches on all these old arcade games and Journey starts playing. You're like, "Aw, this is great!" That's when the film came out. But my character's all about surviving through assimilation. The idea of going down a strict '80s route didn't really apply. What I liked about the idea of Bowie is that he's someone who has constantly adapted and assimilated. He takes what's around him at the time and changes to survive. He plays with the idea of persona and personality and identity, all things that this character touches on. It was Bowie himself, the psychological Bowie, that was important--the look just goes along with that.

So if Castor had been a girl, the actress could have been inspired by Madonna.

Maybe, yeah. But Ziggy's also gender-ambiguous--he's an alien. I like that he's masculine and feminine. If he was a girl, I'd still play Ziggy.

Castor is a nightclub owner trying to worm his way to more power in the TRON world. And he's well-positioned: the guy who runs the bar knows everyone and everything.

He's literally plugged into the grid. People come to him for information because in this place, power is information. He needs to know what's going on at all times, so he has these Sirens gather information for him and bring it back. All the different stratas of the world come to the nightclub, so he's keeping his finger in lots of pies at the same time. That's his power-and everyone needs him in some way. But he has to play a delicate game of making sure that he doesn't make too many enemies in high places.

Your dad was a Jack Nicholson impersonator. What advice did he give you about creating a character?

My dad is a look-a-like rather than an impersonator, which is more to do with genetic freakage-ness than any kind of actual performing talent. He's fairly limited when it comes to that area. But what he has is commitment. I think I've got the ability to commit to a character fully, and that comes from what he does.