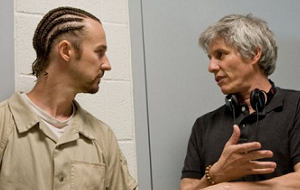 Robert De Niro plays a parole officer. Edward Norton plays a convicted felon. But your film draws parallels between them to ask if we can ever judge others while comforting ourselves that we're a good person.

The opening sets up this benign scene of a couple and then on page six, this sudden and horrific thing happens that could have been the turning point of Jack's (De Niro) life. And then you cut 40 years later and they're still together and sitting in church. I just thought that cut to that couple said so much to me - it was so intriguing - and then to find that the guy works in a prison sitting in judgment of others, it felt like it was a religious parable. Saint Peter sitting at the gates having a crisis of faith. Then a prisoner comes in and sees through Jack and preys on his vulnerability. I think the whole film is about that blurry line of who is this person to judge that person. I read this script four years ago and by the time I got to make it, there was a huge amount of upheaval where that segment of Jack's society - older, white, about to retire, religious - there was a lot of anger and vitriol. I thought this film could speak on a lot of levels to a mood that was prevalent in America. Without putting judgment, just suggesting a dynamic that was out there.

Talk to me about creating the character of Stone with Edward Norton.

I've worked with Edward before [2006's The Painted Veil] and I really had to convince him. He's done prisoners before and he wanted to do something different. His original idea was that he wanted to urbanize his character a little bit, so he came up with the cornrows, which terrified me. I thought, "This could be really, really bad." But I liked the fact that he wasn't taking the character seriously. If he had come at it trying to make him tough and mean, reptilian, I wasn't interested in that. I wanted to make him goofy and unpredictable. And ultimately, part of his transition is his looks, so it helped to take cornrows as an extreme idea. When we went to Michigan and started interviewing prisoners, Edward heard from a lot of different prisoners that he had to meet this one guy. He met him and he became a really big part of influencing Edward's character.

And when you meet his wife Milla Jovovich, she's almost the last wife you're expecting. You've got to reveal the cracks in what looks like the perfect hot, young, sweet, charming wife.

She's really the fireworks of the ensemble and I needed an actress that could embody a lot of different colors. It was difficult. I talked to a lot of different actresses and they'd get some aspects of her, but be flat in others. Milla chased it and when I saw the tape she made for it, it just blew me away. T was the first time I really laughed out loud at the performance. She just nailed it. It was immediate - she was everything. I knew she could present herself as naïve and sweet and slowly unravel to show something more sinister and vulnerable. She was a revelation.

This movie was expanded from a play script that was designed as a claustrophobic character piece. For a visual movie, you had to create a world surrounding it.

It was a story that was purposefully designed to be claustrophobic and I was aware that there was a potentioal for it to be too claustrophobic. The characters are all trapped in their own prisons in different ways. I wanted the sense of Jack going from cube to cube to cube, from his office to his car to his house. There's no respite. But I also wanted the film to have a time and a place and a setting. I wanted to know where Jack lived, I wanted to know his house and his town. And the outdoors is a rare break. It was originally set in the south, but I wanted to move it to Michigan and have the outskirts of Detroit be an extra character.

Your films focus on dysfunctional marriages - what's your interest in these intimate stories between a husband and a wife?

It could be that I've now almost exhausted my exploration of it. When it comes down to it, these are stories that I feel will touch the most amount of people. I'm not a gangster, I've never killed a zombie or a vampire. I've had a normal - or limited - life. Most of the drama has been in the pursuit and maintenance of love. Most of my deepest anguishes have been in that realm of life, and it's the same for the people around me. That's where most of their questions arise. This film is unusual in that you go into it thinking it's a thriller, but it's really guys talking about god. That might sound earnest or pretentious, but to me, these common denominator ideas can connect to people more than genre subjects. I thought that this script was more relevant than anything else I'd read - I felt I'd be bullshit if I didn't do this film. Who doesn't think about god? Who doesn't think about crossing the line of their moral boundaries?

Stone is rare for its frank approach to god and for having religious characters whose religion is just a normal aspect of who they are - not shorthand for a flaw or strength. That's a sensitive subject for a director to handle.

There's an Episcopal priest in there, there's an Evangelical preacher on the soundtrack. I don't have any answers and I don't want to put out any judgment. There's a number of points of view. I'm just sitting at a table and presenting them honestly, but the point is that there isn't closure at the end. I'm not weighting one more than another. As I was making the film, the name of god was evoked so many times in debates about the direction of the country and what was wrong with America. Wow - there should be a film that's talking about this character of god because he's certainly being used a lot. But it had to be done without being maudlin or overly earnest.

Were you on set when De Niro was reportedly accosted by a drunken woman?

Let me tell you what really happened. It's amazing. De Niro was crossing the street coming from his trailer to the set and a drunken street woman crossed his path. It wasn't anything - that would happen 15 times a day in New York or Tribeca - it was nothing. But because it happened in a tiny little town in Michigan, it was a big thing. Police were called. He was "accosted."

Sounds like the town was being overprotective - they just didn't want to make themselves look bad by letting anything happen to him.

You wrote a script for The Killer Inside Me, which became infamous at Sundance when a woman stood up afterward at the Q&A and asked director Michael Winterbottom what was wrong with him to have made a movie that showed brutal domestic violence

I wrote the script, but I never spoke to Michael about the film and the way he'd approach it - not once. I had nothing to do with it. He rewrote the script. I wasn't interested in the violence at all. I was interested in Casey Affleck's ruse. Everybody suspected he was doing these terrible acts, but because nobody had witnessed it, they just took his word - or he thought they were taking his word. That was what I was interested in and Michael added the violence back in.

And next, your name is attached to a film about Zelda and Scott Fitzgerald. What are we going to learn about them?

I'm not sure that I'm going to do that film. I need to evaluate what I'm doing next. They might have different ideas of who's going to direct that now. When I went off to do Stone, that was the choice I had to make. I would love to do that film - there's a great story in that couple. They're both tragic in completely opposite ways. Talk about a crash and burn. And a really fun period to explore. But it's a film I didn't want to approach as a small character piece. I didn't want to do an indie version of it. I want to approach it with the support to do it properly with the scope and glass to do period in New York. To do the jazz of it all.