close
INTERVIEW: Helmer guards the line between games and movies 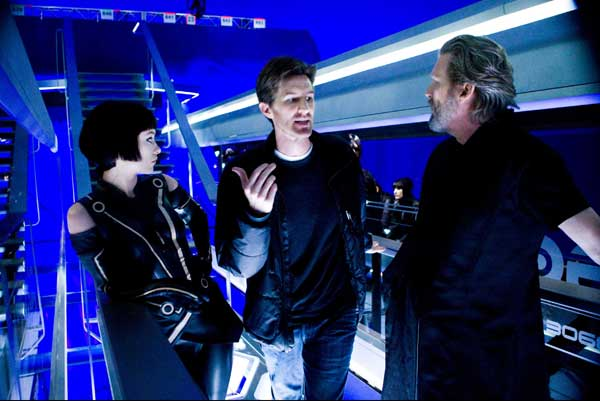 You're fairly unique among directors because you're also an engineer and an architect. How has that shaped your style while making this, your first film?

My favorite directors come from other disciplines. Michelangelo Antonioni was an architect before he was a director. Stanley Kubrick was a photographer, Ridley Scott was an illustrator. I'm glad I didn't come up the film school route because it's good to have another perspective and influences outside the film business—for a movie like Tron, especially, because you're talking about a world where everything needs to be designed. There's no location on planet earth where you can shoot a scene for this movie once the actors are inside the world of Tron. Everything has to be designed and built, either physically as a set or virtually. If you don't love architecture, this would not be a fun movie to work on. For me with my design background, it was an amazing opportunity to create a world where the architecture, the vehicles and the characters had to seem like they came out of the mind of one man: Kevin Flynn.

What did the first Tron mean to you?

It looked like nothing else I'd ever seen. The lights, the design—it was a completely unique vision. I hadn't seen Tron in a long time when Sean Bailey first asked me my thoughts on the movie, but I remembered my impression of it as a child, and that's a good and powerful thing. And I wanted Tron: Legacy to give audiences the same feeling today.

Tell me about a moment working on the film where you were struck by what you'd put together?

Every day—even now as a new shot comes in—it's so fulfilling to finally see something I've been describing for three years. On a movie like this, so much of it at the beginning is trying to explain, trying to portray, trying to sway. To describe to the audience and the actors this world and this mood. It's so nice now that the movie is nearing completion to be able to show people what I've been promising for such a long time. For me, some of the most profound moments I can think of while shooting were when I walked on to the set of the Safe House for the first time. That's the house where Kevin Flynn lives in a cave outside the city, and that's a room that I sketched out on a notepad a couple years ago for the VFX test. To be able to build that room in its entirety and walk on the set with Jeff Bridges and show him Kevin Flynn's home and spend some time with him in there before we started rolling was amazing. We literally walked into something I had thought up years before and had only seen pictures of in a computer. It was a Tron-like experience to walk onto a full set like that—it felt like you were in that world.

You came onto the scene by directing ad campaigns for Gears of War and Halo. Is the line between video games and movies getting thinner?

I think the sophistication of video games over the last few years has made them more cinematic and more photo-realistic. I've had the opportunity to work on a couple great video game spots that are more about telling a story than showing off great features. I approached them as if I was making a tiny film. However, for a while people kept talking about this idea that video games will replace movies, and I just don't think that's ever going to happen. There's no replacement for seeing something through the eyes of a director. I love going to the movies and sitting back and seeing their vision as opposed to navigating it myself. I don't feel like one will ever replace the other, but they'll continue to push each other to win audiences and I think that's a good thing.

The original Tron prophesied our world of computers decades before it existed. This Tron is for audiences who are living in that world. But if you had to make a movie that foretold our future, where do you think the relationship between humans and computers is headed?

It's hard to imagine how you could create a movie now that was so ahead of its time. Tron's concept was clearly 15 years ahead of the world. E.T. was a big hit, but we've never met an alien. Blade Runner was a critical hit, yet we're not dealing with cyborgs. However, the world of Tron came true: everyone's a User now. That's a profound thing to see how true Steven Lisberger's [creator and director of the 1982 film] has become. I think now, all we can do in our film is talk about the idea that technology can be a very good thing and a very bad thing—the importance of understanding the balance of technology in our lives and how important it is to keep perspective and focus on the things that are really important: those human relationships. If anything, our film warns of the dangers of succumbing too much to technology. I think that's the future: us continuing to need balance in a world that's becoming more and more digital.

If you were a program on your computer, what program would you be?

I don't think there is a program that does as many things as I'm interested in. How could I pick music over art? Hopefully a program that's more creative—I'd never want to be a spreadsheet.

What's the latest on The Black Hole and Oblivion, two films you're putting together with Disney?

The latest is that both are in development right now. I'm excitied about both and I've got two incredible writers working on each. I've got Travis Beacham [Clash of the Titans] on Black Hole and William Monahan on Oblivion—Monahan won the Oscar for The Departed. He's so enthusiastic and just understands that it's an opportunity to make a really character-driven science fiction film.

Talk about making films for a kid who's had a cell phone since five. How does a director make a kid put down technology and use his imagination?

I think you've got to make a movie that engages their mind and not just their eyes. You've got to make films that ask interesting questions—and not necessarily answer them. 2001 is one of my favorites. There's no better ending to a movie than that one. I'm trying to make a movie that inspired me the way the original Tron did when I was a kid—something unique, something different, something that they can relate to, which is why we've pushed the father-son story at the heart of this film. No one understands what it's like to get scanned into a computer, but everyone understands the desire to connect with your dad or your mom. That's what this movie is about. That's the core. And all the visuals and the technology is simply in support of the storytelling. I think if we focus on the story, we'll make better movies and kids will come out thinking about things differently. That's the goal.

Is there an arcade game from the '80s you'd love to see remade as a movie?

I really loved Spy Hunter. I think there's even a script out there—not necessarily that I'd want to make it, but I'd want to go see it.