close
For a real fantasy adventure, you have to build a real ship—a sneak preview of the astounding Dawn Treader

on November 18, 2010 by by Barry Robison, as told to Boxoffice
Print 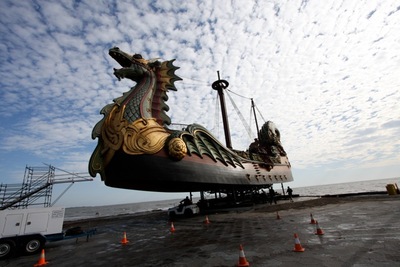 One of the hardest challenges I've ever faced is the building of the Dawn Treader. And I knew it would be because it's such an iconic image from books. It was a daunting task because I wanted it to be everything that C.S. Lewis had written about and that the books had illustrated.

People would say, “Oh, you're building a Viking ship, of course.” I would go back to the book and go, “But it doesn't feel like a Viking ship to me.” The only reason it's a Viking ship is that it has the head of a dragon. 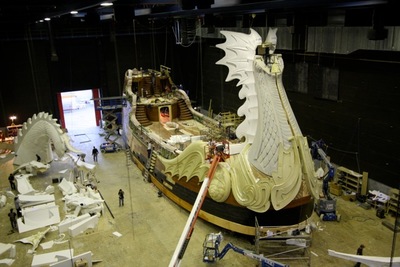 So, I thought about C.S. Lewis and where he grew up. Because I couldn't sit around and talk to him, I had to make up my own stories. I thought that the Dawn Treader was a tall ship like sailing ships of old, the great 18th century, 19th century ships. And the head and tail of the dragon was more like a carousel lion or horse. 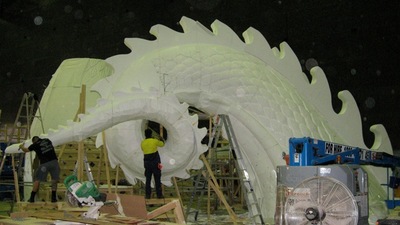 I went to Michael and said, “Well, what do you think about this?” He said, “I don't know—you've got to render it up and let me look at it.” I started to draw it, but it wasn't coming to life. I got some modeling clay and used that to create the boat. From that, Michael and I began to play with the proportions. Because it was all done in clay, it was easy to manipulate. I carved the head, I carved the tail, and once we got it to that part, we quickly got the overall look of the boat. 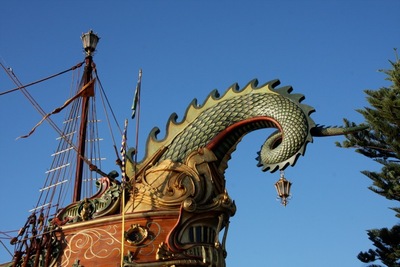 The tougher part came because Michael wanted it to be a boat that floated on water. Wow. So difficult. So technical. My Supervising Art Director Ian Gracie and I started talking to structural engineers for boats and going to look at every tall ship we could see in Sydney Harbor.

Then the producer said, “We're not going to put the boat in open water—what we'd like to do is put it in a tank. We're going to move production to the set that James Cameron built for Titanic in Rosarito, Mexico.” My little art department of four people got on a plane and flew to Mexico to meet the Mexican crew, who had a spectacular art director by the name of Marco Niro, who had worked on Master and Commander. And then after weeks and weeks and weeks of engineering the boat, the studio and the producers said, “No, no, no—we're moving back to Australia.” 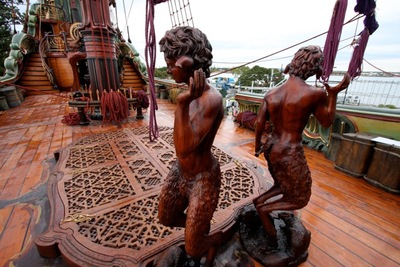 We took everything back to Australia and built the boat on land. Michael was adamant that there be a horizon line where the actors could see water and feel the breeze in the hair. If there was a foggy day, we shot with the foggy day—he wanted reality. The Queensland government found us a little spit—a peninsula—and we built the boat there.

Well, we didn't really build the boat there. That's where we put the hydraulic gimbal, which is a big piece of machinery that makes a boat rock. The FX team got to work on the spit and we went back to the shop and built this metal and wood boat that we could break apart in 32 pieces when the time came to take it 20 miles down the road to the site. Then it was reassembled, touched-up, rigged in place with all the ropes—which had to be Narnian ropes, not normal ropes. If you look closely, they're very unusual and all different colors. After the shooting, we took the boat apart, drove it to a sound stage, reassembled it, and shot all the special effects work.

When you look at the film, know that it was a complete boat. I defy anyone in the world to tell me that that boat was not real when they're looking at it—it was 100 percent real. The only thing that is doesn't do is float on water, and that's only because it didn't need to. It was just a great challenge—I'm one of the luckiest guys in Hollywood for getting the chance to do it. 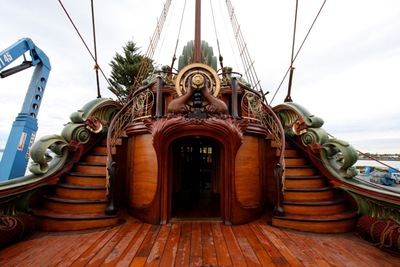