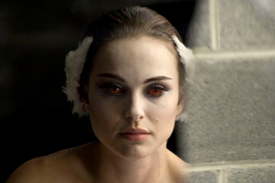 Making a film about the artistic process—and the cost of its success—is especially trying for an actor. When the on-screen challenges closely mirror the real-life behind the scenes, the pressures are doubled and it's hard to shut off the character when you leave the set.

"As soon as I finish shooting I want to be myself again," says Natalie Portman. Her role as Nina, a perfectionist ballerina, demanded that she live in the gym five hours a day for six months before cameras rolled. But harder was capturing Nina's panic that she's not good enough to play the two leads of Swan Lake, the naïve White Swan and the hot-blooded Black Swan. Nina's so high-strung and uncomfortable in her skin that she literally scratches herself while she sleeps as though she's trying to erode away to nothing.

As Natalie Portman admits, the physical challenge of playing a ballerina made her connect to Nina's own struggles more immediately than she has with her other characters. But at the end of each day, she was happy to slip out of Nina's leotard.

"I'm not someone who likes to stay in character," says Portman. "This clearly had a kind of discipline that lent itself to me being probably more like my character while we were shooting than past experiences, but I just go back to my regular life afterward."

And as Portman explains, Aronofsky's own commitment to the material helped her tap into the tough role.

"One of the reasons that I think Darren and I had such sort of telepathy during this is that I feel that he's as disciplined and focused and alert as could possibly be," says Portman. "That's what I try to be. I'm not a perfectionist, but I definitely like discipline—I'm obedient."

By contrast, Mila Kunis, playing earthy rival ballerina Lily, had to both maintain those same rigid physical standards and dance with the natural, spontaneous joy that Nina lacks.

"It was far from effortless and sensual," admits Kunis of the work it took to appear effortless. "You can only fake so much, so you have to kind of immerse yourself in this world, in the way that somebody walks and talks and handles themselves. So it was three months of training, seven days a week, for four or five hours a day before production started-and then during production it was pretty much exactly the same."

"The physicality of it was probably the hardest of anything that I've ever done," says Kunis. "But whether it's a comedy or drama or horror or romance, it's all the same. You want to be honest with the character. You want to play truthfully and you want to be genuine with your character."

It's precisely this search for truth that unifies director Darren Aronofsky's eclectic filmography. Consider Black Swan and The Wrestler as companion pieces: two portraits of artists sacrificing their bodies and their lives for their art. Says Aronofsky said, "It doesn't matter if they're an aging fifty-something year-old-wrestler at the end of his career or an ambitious twenty-something-year-old ballet dancer, if they're truthful to who they are and they're expressing something real then audiences will connect."

"That's always been the promise of cinema and that's why we can see a film about a seven year old girl in Iran or an immortal superhero in America. It doesn't matter—as long as they're truthful."

With Black Swan being equal parts backstage drama, sports film, coming-of-age story, character study, psychological thriller and even full-fledged horror flick, even Aronofsky hasn't wholly dissected its mash-up of influences and inspirations—he's only now starting to figure it out himself.

"A lot of times you figure it out when you're doing the press tour because you start talking about it and becoming aware of it," says Aronofsky. "This was my best attempt at a genre film, and I think that audiences don't need that anymore, a very specific genre. Audiences are very sophisticated, and as long as it's fun, it's okay and entertaining."

If anything, he thinks modern movie fans are so over-familiar with genre tropes that they welcome a movie that shakes them up. And if Black Swan takes off, directors, studios and audiences can be emboldened by the flick's unusual dramatic choices. Says Aronofsky, "People are bombarded by so much different types of media that they're hungry for just a very, very different experience."