close
INTERVIEW: Rogen on 3D, the Carebears and being the smartest dolt in the room

The Green Hornet's Seth Rogen: I Love You, Manservant 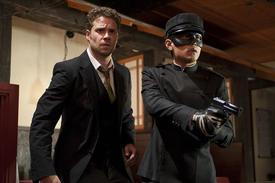 The films you've written—Superbad and Pineapple Express—are centered on a strong guy-to-guy friendship. And here, you're writing about another one with the bond between your Green Hornet and Jay Chou's Kato.

It seems like there's a million different types of movies that you can do and use them to explore these friendships, which I guess are the friendships that me and Evan [Goldberg, his steady co-writer] have had our whole lives. It's what interests us. This movie is about a partnership—a professional partnership—coupled with a friendship, which is obviously something that we really relate to. It's interesting as writers what kind of crazy movies you're able to inject with something that you feel very personally about. That's kind of the fun of it.

And it's interesting how the role of Kato has evolved. In the '30s and '40s, he was more like a manservant. Now, he's cooler than you—even if he still makes you coffee.

We tried to take a lot of stuff that was from the original radio shows and serials and comic books and make it organically part of the emotional story of the movie. What Evan and I kept noticing is that Kato, as much as he was Britt Reid's partner as a crime fighter, he was always put in this subservient role in their real lives-and how ridiculous that always seemed. So we tried to make that a real part of the movie and a part of the emotional story of the movie, and tried to explain emotionally what that might be like if you were this guy who was out there building these cars and kicking the crap out of these dudes, and then as soon as your mask came off, you were forced to make coffee for someone.

You're a really smart guy. And compared to Kato—just like in most of your films—you're playing the dumb guy. What's it like to act like you have fewer brain cells?

It's fun! It's just funnier to make movies about dumb people than smart people, I think. I could never write Good Will Hunting.

I'd love to see you play a Mensa scientist.

That would be interesting! One day-the next one! The Green Hornet is not that, I will tell you.

We did talk about it a little bit. He told me what his version was like; I told him what our version was like. That was pretty much it, but we had a few conversations about it. We had pretty into our film at that point already, so we were already doing our thing.

You're a post-3D converted film. You've been working on it far longer than Clash of the Titans had a chance to, but with Harry Potter and the Deathly Hallows making headlines when they decided to scrap the 3D conversion, are you anxious about any blowback?

I think the negative rap is in very limited circles. I know when I talk to my friends in Canada, they don't even know what that means. Amongst snobby film people, it's something that is very in-fashion to have strong opinions on, even though most people have very little actual knowledge of the merits and downfalls of conversion versus shooting in 3D. So honestly, it's not something I worry about that much. I know that I've had many conversations with film people who know more than most people and they can argue both sides of that argument. It's a personal, creative preference as far as I'm concerned. I personally prefer the look of conversion as opposed to something shot in 3D because I prefer the look of film to digital.

Fair enough. Tell me about some of the 3D footage you're excited to show off to people.

When Gondry first conceptualized a lot of his ideas for the action n the fight scenes and the way Kato conceptualizes these fight scenes before they happen, it was all conceived of for a 3D movie—we all wanted it to be in 3D, we just couldn't get the money from the studio to shoot it in 3D at the time. And back then, we didn't know that much about the fact that we didn't need to. Alternately, it's all worked out great and the more we see of these fight scenes as they come together in 3D and the different kind of flashback sequences that Gondry's designed, it's incredible and it's completely unlike anything I've ever seen. It's really exciting to know that that stuff's going to be in the movie.

And you fought hard for Gondry to be your director—is that because you knew he'd invent something out-of-the-box?

We did. I knew when I go to an action movie, what I need is just to see something I've never seen before. To me, that's the bar: it needs to show me something that visually I've never experienced. And the idea to us of Michel Gondry directing a 3D action movie guaranteed that we'd be shown something that we'd never seen before—and he's really made good on that. He does have a very big budget sensibility when it's applicable—it's not all cardboard and string. I think one of the things that will surprise people the most is how crisp and slick the movie is. Even though it has a lot of creative ideas, it looks like a real big movie.

You wrote an interesting character for Christoph Waltz: a villain going through a mid-life crisis.

To us, just as it's important to tell the story of Britt Reid becoming a hero, we wanted to tell the story of a guy becoming a super villain, so to speak. We wanted to play with the general motivations in these movies, so we thought it would be interesting if our villain's motivation was born more out of self-consciousness and crisis than some kind of maniacal plan. The more the Green Hornet's star rises in the criminal world, he feels like he may be not interesting enough and he has to up his game more and more.

You buffed up to play the Green Hornet. How does it feel to have your weight analyzed in the tabloids like Renee Zellweger's?

[Laughs] Luckily, I don't read any of those things, so it doesn't feel like anything.

After your athletic training, if somebody came up to you in an alley, what would you do?

I would run. I'm now equipped to run away much better. That's what's good—I'm a faster flee-er.

Is there another TV show you would love to see made into a movie?

Me and Evan have brilliant idea for an R-rated Care Bears movie that no one will let us make. A really violent Carebears movie.

What are you and Judd Apatow talking about next-any collaborations you're kicking around?

HORNET HISTORY: ROGEN ON EIGHT DECADES OF GREEN HORNET MEMORIES (AND WHAT MADE IT INTO HIS MOVIE): 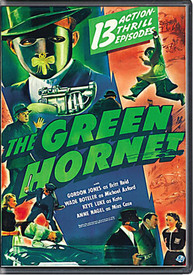 '30s SERIALS: The serials were amazing—I literally have the DVD in my TV right now in my office. The mask was really cool and scary—it covered his whole face. We actually designed the impact of our gas bullets inspired by the visual effects they used for the gas gun, these amazing composited gas effects where every time the Hornet shoots the gas gun, this puff of smoke explodes in front of the person it hits. 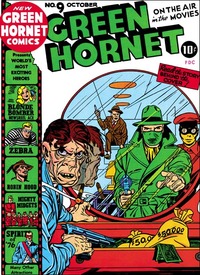 '50s COMIC: Those are hard to find. I have one or two, but I don't read them that often because they're in such bad shape, I'm afraid I'm going to rip them. The original Green Hornet Black Beauty was a Zephyr and we have one of those in the movie just to give a nod to the old comic. 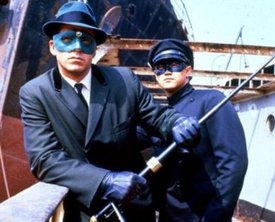 '60s TV SHOW: The TV show we took the most influence from. A lot of the dynamics were inspired by the idea that Kato was so much more charismatic and awesome than the Green Hornet. Kato does all the ass-kicking and is relegated to the role of butler when they're in their alter egos. That was the inspiration for our emotional story in the movie. 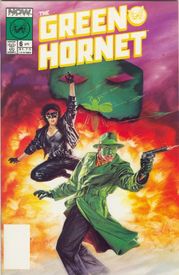 '90s COMIC: They get a little weird—Kato's a movie star in some of them and he actually has a drug problem! The '90s was a weird time for comics. 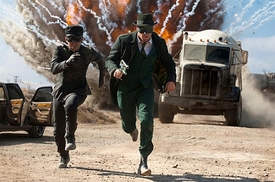 HIS HORNET: We take a lot of the essential ideas that all of these have had, and I think we just explore more how everyone would be realistically acting with these superhero things. And we keep an eye on how to make that funny while also keeping it realistic. We tried to make it so our guys could fit in any version—the only difference is that our guys were constantly talking about how they feel about what's happening.