Q&A: 'The Kids Are All Right' Director Lisa Cholodenko 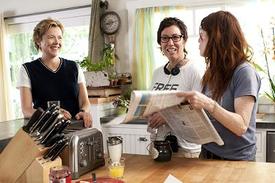 As Oscar season begins to really heat up, one of the films that prognosticators consider to be a major contender is The Kids Are All Right. The Focus release is a dramedy about a gay married couple (Annette Bening and Julianne Moore) facing adversity when their children (Mia Wasikowska and Josh Hutcherson) find their surrogate father (Mark Ruffalo) and bring him into their daily lives. The Kids Are All Right opened on July 30—the heart of the summer blockbuster season—to rave reviews and a steady stream of ticket sales. During its domestic theatrical run, The Kids Are All Right raked in a healthy $20.8 million.

Director Lisa Cholodenko is now making the rounds in order to ensure that her small, intimate film is not forgotten during the rush of heavyweight Oscar contenders.

Before you began shooting the movie did you watch any films about married couples or any relationship dramas that helped you find your footing for this movie?

You know, I didn't study them in a kind of research-y way for this film. What I realized is those are the kinds of films that I've really paid more attention to, and I've seen that genre more than any other. There's seminal films for me like A Woman Under the Influence, Ordinary People and The Graduate. I guess on some level I've drawn ideas from just being attracted to those kind of films.

When I discuss The Kids Are All Right with other people, one of things that always comes up is that a lot of viewers wanted more of a resolution from the Paul character (played by Ruffalo). They think it ended on a bad note and they wanted to see more. Did you guys ever have an alternate ending? Or did you always know you wanted to end it the way you did?

We explored many, many endings and we did have a scene where there's more closure ... more of a Hollywood ending. I didn't mind having that, and the more sappy part of me wanted that. However, the part of me that has more integrity as a screenwriter felt like that didn't feel honest in terms of the scope of the narrative. It wasn't a film about the family embracing him and pulling him into the fold, it was about the family going through this pretty hard adventure to find their footing as a unit. We did want to imply that it was open and anything could happen in the future.

I like that Paul exists in a gray area. You like part of him, and part of him you don't. The ending preserves that.

We always saw him as this character who is on a path, and he's a little bit arrested in some ways. He hasn't resolved certain things within himself, and he's made some funny choices. And maybe this is a place where a person like him bottoms out and wakes up.

Is there any one compliment about the film that stands out to you?

I had dinner with Shirley MacLaine and she loved it. That was crazy and very exciting.

The movie opened on July 30th in the heart of the summer blockbuster season, and yet it was able to slowly build its audience. What was it like for you to watch your intimate film really deliver at a time when moviegoers are looking for explosions and car chases?

It was awesome. Once you hand the film over to a film company you never know what's going to happen to it. So much of it is out of your hands. You might think you made a great film but somebody could mishandle it and it goes away really fast. So once we sold it to Focus and they rolled out the campaign I could see how much they cared about it. That was exciting to me to have a company care about it as much as I thought it should be cared about. The cherry on top is to see it work. The right critics liked it and it was working at the box office. I think everybody at the end of day felt it was a success. Now we are into awards season and it's being talked about for that.

I know some people like to ignore awards buzz, or pretend that they're not interested. How do you react to it? Do you just roll with it and accept that it's part of the game?

I'm not that self-important to think that those things don't matter. They do matter on a lot of levels. The most basic level as a filmmaker is to have that kind of validation from other filmmakers, and that's really an incredible experience. I'm not beyond liking it and appreciating it, but it's hard work. We're definitely out there working the system like anybody else, and especially because it's a film that's smaller and needs to stay exposed. I'm exposed in a away that I've never been before, and it's a bit exhausting.

Do you have any idea what you're going to do next, or are you still intensely focused on promoting this film?

I'm busy with working this until the end, but I do have other things that I'm in various stages of development on. I'm not going into productions with anything this year.

The Kids Are All Right is now available on DVD/Blu-ray.