close
The Coen Brothers take on a classic American tale

A Ride Through the History of 'True Grit' 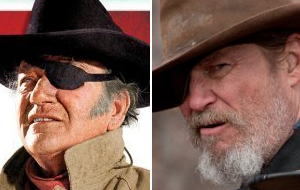 With the late-December release of the Coen Brothers-helmed remake of Henry Hathaway's 1969 western True Grit, it's a terrific time to sit down and see what's in the 1969 flick that made Joel and Ethan Coen want to write and direct their own unique realist-absurdist redo-and what they'll want to change.

In both the 1969 and 2010 movies (and, of course, the source material: Charles Portis' much-heralded novel of the same name), 14-year-old frontier girl Mattie Ross has taken it upon herself to avenge her father's murder by his hired hand, Tom Cheney—with help from boozehound / US Marshal Rooster Cogburn. That's the plot. Now, let's talk about what's really important to the 1969 version of the film: John Wayne. From start to finish, the idea that a 14-year-old girl is, you know, setting out to avenge her father's death, is treated as small potatoes compared to the fact that John Wayne is the headliner of the movie. (And for it, he'd be rewarded with an Oscar plus his own sequel, 1975's Rooster Cogburn.)

The casting of America's favorite cowboy shifted the star of the movie. Portis' original novel focused on Mattie's excursion into a world of vengeance. But in the 1969 flick, Mattie must be content to cede the spotlight to Wayne's Cogburn, another in his series of tough old cranks. (See also: Ethan Edwards in The Searchers and Col. Mike Kirby in The Green Berets.) Rooster Cogburn's a drunk, money-hungry, eyepatch-wearing Civil War vet willing to kill—he's already shot 23 men, give or take a few.

Of course, the dynamic might have changed with a different Mattie: Sally Field, Mia Farrow and even future pop star Karen Carpenter read for the role. Wayne hated Hathaway's pick, Kim Darby, a child TV actress breaking into film. "Talk about having no chemistry with your leading lady!" he grouched. "She was the lousiest actress I ever worked with."

Henry Hathaway's direction hints that he was at least a little curious about the question of Mattie's quest and the true nature of vengeance. In the margins of his movie, he shows us a town as excited for a triple hanging as for a state fair: the hotels are full and the people are picnicking by the gallows. Even Cogburn's insistence that all of his killings were in self-defense sounds like he's convincing himself. But these navel-gazing moments are left unexplored and later blasted from memory by Elmer Bernstein's cheery soundtrack that screams, "It's John Wayne! And there's a purty mountain!"

An expensive star like John Wayne has the power to strip a movie of tension. We know he's not in real danger until the last reel—the producer and the audience want their money's worth. The timbre of the movie is that it's one last hurrah, not just for Wayne and his invincibility, but also for the idea of movies as places where the good guys always win. No coincidence then that it arrived in 1969, right before the muddy '70s slog out of Vietnam made us reflect on the nature of heroism and the American spirit—questions the Coens have chewed on in every one of their films from Fargo to The Hudsucker Proxy to O Brother, Where Art Thou?

Lately, the Coens have also been pressing the question: "What profiteth a man?" What does it profit a man to do what is "right?" (A Serious Man) What does it profit a man to, well, profit? (No Country for Old Men) That's their draw to this story of a young girl who considers herself honor-bound to avenge her father's death—what will it profit her to demand payback?—and to make it right, they're skipping the 1969 movie and jumping straight to the original novel. And the Coens have sworn that their movie, like the book, will be seen through the eyes of Mattie: Mattie, the young girl forced to fight after her father's death. Mattie, who must dig up in herself the "grit" to get retribution.