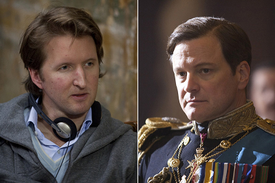 How are you reacting to all the Oscar buzz? Do you try to shy away from it or do you accept it as part of the game?

It's a bit early. Call me old fashioned, but my film has yet to make a dollar at the box office. I'm focused on making sure that process goes well first. I've made this film for the public to come to and enjoy. It really makes people laugh and cry. I want as many people as possible to have that experience.

I think the thing that I've found most exciting is that heroes of mine have liked it. Peter Weir, Ridley Scott, Mike Nichols ... these complete heroes of me as a kid growing up have seen it and respect what I've done. That's the biggest thrill.

There's been some complaints about the poster that was first released for the film. Are you going to have any say in future drafts or are you leaving it up to The Weinstein Company?

I will [have a say], and apparently that poster was never intended to be the one that went up in the cinemas. It was kind of an online poster filling the gap until the next poster came out. I'm sure the next one that comes out will be better.

How important do you think the poster is when it comes to shaping opinions?

That's a good question in the modern world. I think there's so many way you come to a film now: the trailer online, reading about it in the blogs, people tweeting about it. So I don't think the poster has the importance that it used to in the old-fashioned culture.

Check back closer to the film's release on November 26 for the rest of our interview!