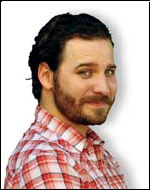 I write copy for movie advertising. Poster taglines, trailer voiceovers-as in, that deep voice that says "In a world ..." The one guy that did the "In a world ..." voice was Don LaFontaine, but he died two years ago and, anyway, that cliché is pretty over.

For print ads, you're looking for one good line that matters—and can even inspire the poster. I wrote a line for Crank—"Poison in his veins, vengeance in his heart"—and the poster is his arm with "Crank" written in his arteries. You can work from just an idea. If it's a sequel, a client will say, "Here's the concept. You don't even need to read the script."

For AV—writing words for commercials and trailers—you have to know the movie better. TV spots are just a step above taglines. It's two lines, maybe three. A trailer is two and a half minutes—it's five times longer and there's usually a three-act structure. Sometimes the first act is a rug pull: it sets up an expectation and then the second part knocks it down.

There's an episode of South Park where they make fun of Rob Schneider's movie trailers because they're all the same. "Rob Schneider was a normal guy ... when suddenly he got turned into a stapler!" That's the comedy trailer style, especially when the premise is so wacky you have to spell it out.

Comedy is the hardest. You have to be creative because you don't have the time to set up the joke. Horror has to be scary, but done badly, it'll be funny. And you have to get the concept across without turning people off.

For a poster tagline, I'll brainstorm at least 50 possible lines. If I hit 100, I slow down. I put my favorite lines at the top. It's both giving them options and, "Hey! Look how clever I can be!"

I've heard that people who do this for a while get burnt out. It's a challenge to really find what makes an individual film interesting. What is its hook? Why should people see it?

My process is to focus hard on an idea, then walk away and clear my head. You can't predict inspiration. I could be making dinner that night and—pow!—I'll think of a great line. It just comes to you. But I also get stuck all the time. You hit your head against a wall. It's a high-pressure situation.

When people tell me, "Oh, your job is so great!" I tell them that it depends on the movie. Just because I don't like a movie doesn't mean other people won't. I write for the movie's audience. Like—and I didn't write this one—for the second season of Gossip Girl, the line was: "OMFG." Perfect. That's the show.

People don't really get how huge the world of movie advertising is. Even for movies that failed, executives and writers and marketers sweated and did the best they could to make it make money. That's the question: how much does the marketing pay off? If you throw a huge budget behind a bad movie, does it work? Or the opposite: if it's a good movie, will it still find an audience?

Of course, there are still moments like this one at the Key Art awards, an awards show for marketing. We had a lot of art up from one of the Lord of the Rings movies. Kevin Smith looked around and said, "Yeah, you guys had a really hard time selling tickets to that. You could have made a trailer of Peter Jackson's sweaty face and people still would have gone to see it." Still, the marketing on that movie made it look great. That's the job.

Some of Nick's best lines: This is not a love story. This is a story about love. — (500) Days Of Summer / In the harshest place on earth, love finds a way. — March Of The Penguins / It doesn't matter how big your guns are if you're shooting blanks. — Tropic Thunder


Cheaper by the Dozen: