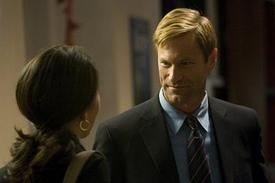 Ask actor Aaron Eckhart about filming the anticipated new drama Rabbit Hole and he shares how he snapped candid pictures of his co-star, Nicole Kidman on the set.

"I have this great shot of Nicole," Eckhart shares. "She's talking to the neighborhood kids in her pajamas, and I'm shooting down on her. It's quite a good shot."

Eckhart acts like a star-struck observer, but his own career deserves plenty of respect. He's scored some indie smashes along the way, like Thank You for Smoking as well as one of the biggest box office hits of all time, The Dark Knight.

Rabbit Hole might make it harder for Eckhart to keep up the self-effacing act. He's outstanding as a parent who lost his four-year-old son following a traffic accident. Kidman plays his equally shattered spouse.

The actor attended a group counseling session—in character—for parents who lost a child to help prepare for the role.

"I only did it once. I felt it was unethical, like I was taking advantage of those people, and once was enough," Eckhart says. "God, they're heart wrenching. Rabbit Hole is an apt title. Your entire life is engulfed in this one thing. That's the way you see the world."

Eckhart, honored with the Excellence in Acting Award at the Starz Denver Film Festival last month, appreciated the way his co-star and Oscar winner Dianne Weist approached the delicate material.

He points to a small but powerful verbal skirmish set in a bowling alley as just one example of the joys found in filming the movie.

"There was some good stuff going around. It's fun to watch that as an actor," he says.

Rabbit Hole director John Cameron Mitchell (Shortbus, Hedwig and the Angry Inch) says Eckhart's contributions to the film were far more than being a giddy observer

"Aaron gave me such great variety on something as simple as when he's looking at the video [of the couple‘s late son]," says Mitchell, who sought actors with a delicate touch for the project. By downplaying the anger and sadness Eckhart brought his character to life, the director says.

"When an actor is crying the audience might not be. We're doing their work for them," Mitchell says.

The actor recently spoke to director Christopher Nolan about the third Batman film, and he brushes past talk of resuscitating his Harvey "Two Face" Dent character.

"I think Chris is coming up with a whole new deal," Eckhart recalls. "Heath [Ledger] was always supposed to go on with other films, it was set up that way. It was quite obvious he was going to be Batman's foil for a while. Two Face was a facilitation, although thank God for me—it was fun to play."

Eckhart's profile may rise with or without a superhero's help, but don't expect to see him gracing the pages of US Weekly on a regular basis.

"People aren't interested in what I do . I'm a boring old man. There are so many more fascinating people out there," he says.