Blake Edwards in '88: I Have a Hunch Bruce Willis is Going To Make Dramas 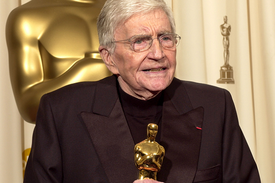 Comedy writer and director Blake Edwards died Wednesday at 88. His most memorable creations were Holly Golightly, Inspector Clouseau and ... Bruce Willis? Among his achievements, Edwards was the first in Hollywood to put the Moonlighting star on the big screen. Blind Date (1987) and the quirky Hollywood Western Sunset (1988) were flops and their pivotal partnership has been forgotten. In a May 1988 Boxoffice interview—just months before the release of Die Hard—Edwards talks about his commitment to making Willis a movie star (even casting him at the expense of Madonna) and makes this uncannily accurate prediction about Willis' career: "I have a hunch that Bruce is going to work more towards drama, perhaps even spitefully ... No one did Cary Grant better than Cary Grant, and hopefully nobody will be able to do Bruce Willis better than Bruce Willis."

Subscribe to The Vault to read the full three page interview here.