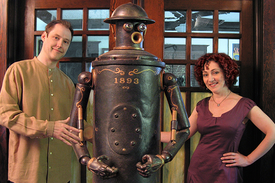 Paul Guinan's invention, Boilerplate the Victorian Robot, became an Internet sensation with its historically accurate stories and highly convincing Photoshop shots of the robot adventurer posing with Teddy Roosevelt and Pancho Villa. The site confounded some, mesmerized many and became the darling of a blooming Steampunk community. (Even comedian Chris Elliot was convinced Boilerplate was a century-old hoax.) The book, Boilerplate: History's Mechanical Marvel, seized the imagination of J.J. Abrams, whose aptly-named Bad Robot Productions snatched up the option to shoot the film for Paramount Pictures. In this exclusive first interview, Boilerplate creator Guinan and his wife and collaborator Anina Bennett give their exclusive first interview to BOXOFFICE about why they think the Star Trek director is the right choice to take audience back in time and their dream cast for the job.

Where did the inspiration for Boilerplate: History's Mechanical Marvel come from?

Guinan: It comes from my love of history. I wanted to tell historical tales without embellishments. I was first attempting to do this back in 2000, before a lot of graphic novel companies were really prepared to do that kind of thing, I realized that I needed a Mary Poppins "Spoonful of Sugar to Help the Medicine Go Down-" approach. I needed to have a fictional character to sort of guide you through various historical adventures. I decided on a robot because I figured it would be a more universal character. It would be easier for a wider variety of people to plug into. Plus, I'm a science fiction fan and I enjoy the idea of juxtaposing science fiction elements with historical elements.

Did you two anticipate Boilerplate being so quickly embraced by the Steampunk community?

Guinan: Technically Boilerplate is Steampunk. It's science fiction that takes place in the 19th Century, in the Age of Steam, but I didn't necessarily see it that way. I think of it more of as a history book with a robot character. It doesn't have the usual Steampunk tropes like the dirigibles and goggles and gears, but I'm tremendously flattered and appreciative that the Steampunk community is so intrigued with it.

Bennett: But we're not surprised, it's natural. They love robots, it's set in the Victorian Era and a lot of them are into history.

But you weren't targeting them, it was more based out of your love of Science Fiction and History.

Bennett: Right, when Paul first started telling his stories on our website, that was quite a while ago when the Steampunk community was not nearly as large and prominent as it is now.

Who's representing Boilerplate as a property and how did Hollywood got wind of it? Did J.J. Abrams' people come across the Boilerplate coffee table book in the bookstore or have you been pitching it around?

Bennett: The short version is that we got connected with Deborah Newmyer and Outlaw Productions in LA and they wound up talking to Paul and I about what directors we'd like to see attached to it and we said, "Well, let's start at the top: J.J. Abrams!" We'd always been particularly impressed with the way he handled the history in Star Trek. It's sort of analogous; he took all of this arcane history that's unfamiliar to a general audience and packed it into a pretty entertaining movie and won this whole new audience by making it all understandable and fun. So they took J.J. a copy of the book and apparently he liked it a lot. They told us that people bring him robot movies all the time, but this is the one that is going to be their robot movie. There is no director attached at this time.

Have they gotten back to you as far as including Paul in production design?

Guinan: No, they just optioned it very recently.

Bennett: It was Paramount who optioned it because they have a deal with Bad Robot.

Guinan: So its too early to tell and plus J.J. being busy with the Undercover TV series and Super 8 we don't expect to have a real formal sit-down until the Spring. We have had a couple of informal exchanges, meet-and-greets at San Diego during Comic-Con, but nothing of substance yet.

Let's speculate a little. How would you like to see Bad Robot adapt this book? It's pretty epic and set against a rich kaleidoscope of history. How do you see them adapting it into a three-act narrative?

Guinan: We've already tinkered around with a treatment, which I don't expect them to adhere to, but at least give them a jumping-off point. I've always been a fan of historical epics like 55 Days in Peking with Charlton Heston and Lawrence of Arabia so, of course, I would be very flattered to see a big, historical epic approach, but there's also the Citizen Kane structure where its episodic and character's tell their own little stories, making it a little more enigmatic as to who this character is. Then there's also the mockumentary approach. It's a tough call.

Bennett: I'm going to wait and see what JJ has in mind.

That initial moment when you received the call that Abrams was definitely interested in the project, how did you react?

Guinan: These kinds of things sort of happen in dribs and drabs. For instance, when they was initially asked, "What director?" and we say, "J.J.!" Deb at Outlaw Productions says, "Oh, I've know J.J. since he was a teenager!" We know at a certain point that J.J. saw it and later we heard through Deb that he liked it and later we heard that they were going to go ahead and start an option process. So it didn't come as one sort of Lotto Moment, it came in a staggered series of green lights.

You guys at some point have must have sat around the dinner table and done a little dream-casting...

Guinan: [laughs] Of course, I'm always doing the casting. I've got a bunch of them in mind. Jon Hamm, Aaron Eckhart, Billy Crudup-this is all for the Professor Balthazar, Boilerplate's creator. Of course, the robot is just a digital creature and maybe an animatronic puppet.

How about the voice talent for Boilerplate?

Guinan: I always thought of his voice as being akin to the kind of voice you would hear coming off a Victrola-very muffled and distant, so I'm not sure it would be worth it the have a celebrity voice, it would be kind of a waste, I imagine...

I don't know, Vin Diesel got a lot of mileage out of his two lines in The Iron Giant-

Guinan: That's true, I forgot about that!

How did you go about producing the illustrations for the Boilerplate? The majority of illustrations weren't done in a traditional pen and ink style-the book was almost entirely done with digital effects, correct?

But then you also did all of the other illustrations in the book, images that borrowed from print and graphic styles from the era, correct?

Guinan: Correct, with a few exceptions. Out of about 300 images, there were about a half dozen that I had done by fellow studio mates at Periscope Studios because I like inviting friends to the party as it were. The rest of the images, especially the photos, were achieved by creating a 1/6th scale articulated figurine that I then used as the photographic basis to superimpose these images.

I've always envisioned a huge public response to seeing the actual Boilerplate figurine as akin to that of Willis O'Brien's tiny King Kong puppet-the world being shocked and amazed to discover it's only 12 inches tall. You built the practical model all by hand, correct?

Guinan: Yes, it was all scratch-built.

There is actually a Boilerplate: History's Mechanical Marvel Teacher's Guide. Did you pitch this to schools as an educational resource?

Bennett: We didn't have to pitch it. The man who wrote it is a college professor in Canada and he is using the book in several of his classes. Teachers have also found out about it and the people who come by our table at conventions. We always have it on our table at conventions. A wide variety of people are interested in it-parents use it to talk to their kids about the book, people who do home schooling use it

Anina, how many hours were put into your historical research and verification for the actual story text?

Bennett: Oh my God, I have no idea-hundreds.

Remind me how long ago you two launched the Boilerplate website?

Bennett: Paul originally created the character for a graphic novel that was never published. We always had in mind to do these kinds of photo illustrated back-up stories. Then he started posting them online and those are the seeds of what eventually became the coffee table book.

What was the initial print run on the coffee table book?

Bennett: I know that it's now in it's second printing.

What's your wildest hope for the film version of Boilerplate?

Anina Bennett and Paul Guinan will be the Guests of Honor at the upcoming Nova Albion Steampunk Convention March 25, 26 and 27 2011 at the Hyatt Regency in Santa Clara, California