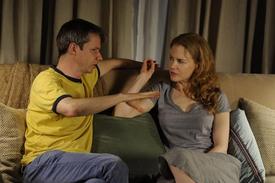 Whether by accident or design, filmmakers develop trends and throughlines during their career that come to define them. In some cases, it's a certain technical flourish or style; in others, it's a particular subject matter. But there have been a handful of directors in film history who are basically defined by being undefinable - in other words, their work spans too many genres, styles or subjects to be categorized as anything other than the work of a cinematic chameleon. With the release of Rabbit Hole this coming weekend, it appears that director John Cameron Mitchell has joined that rarified group. The director of Hedwig and the Angry Inch and Shortbus has abandoned all of his previous stylistic choices to make a raw, stripped-down domestic drama.

Check out a small collection of filmmakers, old and new, who enjoy being known for finding different sources of inspiration each time they tackle a new film.

When you start your career with uncredited sequences on The Magnificent Ambersons and move through science fiction, musicals, horror movies, war films, docudramas, and, well, flagship Star Trek films, there's no better way to describe you than "versatile." But the real mark of Wise's films was his sincere and effective fealty to the genre or subject matter in question, treating it with respect and seriousness as he brought it to the screen, and giving it a gravitas and lasting impact that makes each of his efforts a standard-bearer for future generations of filmmakers.

The indisputable grand master of genre-hoppers, Scorsese has taken on musicals, costume dramas, documentaries, spiritual odysseys, remakes, sequels, family dramas, and occasionally, gangster stories during his almost 50-year career. What's most remarkable about Scorsese is that his films are instantly recognizable, and yet always manage to perfectly suit the subject matter he's exploring, making him both a true auteur and a versatile workman at the same time.

There seems to be a "one for them, one for me" mentality to Soderbergh's choices, but few directors in the past two decades have as effectively established bona fides in both the commercial and art house worlds of moviemaking. His debut, ‘sex, lies, and videotape' practically defined the landscape of modern, independent dramas, but after that, he digressed into wartime dramas, documentaries, Elmore Leonard adaptations, Oscar-bait docudramas, crime-saga tapestries, glib, enjoyable caper flicks, gritty budget-busting indies, note-perfect recreations of films from past eras, and obtuse biopics of real-life public figures. Indeed, his films seem the least identifiable of anyone on this list, and yet, every time he makes a movie, it's an event.

The deliberation with which Boyle has tackled different filmmaking challenges seems to permeate every choice he makes: it's not enough for him to go from druggie jaunts to horror flicks to oddball romantic comedies to kids' films to science fiction to real-life containment dramas, he's got to leap into each one using a different visual style and a different technological approach. His appeal thus far has largely lingered in the art house world, but it's where he seems comfortable, and it makes him a particularly formidable filmmaker, because his connection to the commercial fringe is perpetuated by his ability to bring audiences in while managing to keep himself (and that audience) interested in a different experience every time.

Although he's still a relative newcomer to international audiences, he's quickly established himself to be a versatile and passionate filmmaker whose new project defines itself primarily by not being like its predecessor. He made three films in the Pusher series, created a murder mystery, helmed a Miss Marple adaptation, then made a glorious, artsy biopic in Bronson before submitting to a "pure cinema" approach for Valhalla Rising. His next project is Drive with Ryan Gosling and Carey Mulligan, and holds the promise of being his big commercial breakthrough; but the fact that he already has something else completely different lined up immediately after that signifies that this is a director who isn't going to slow down, whether one of his ideas works or not.