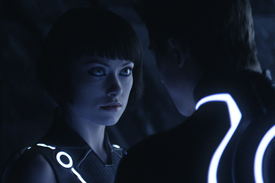 After memorable stints on The O.C. and House M.D. and a string of increasingly high-profiles in films like Turistas and The Next Three Days, Olivia Wilde is poised to make an overdue break into A-list stardom with TRON: Legacy, where she steals scenes from co-stars Garrett Hedlund and Jeff Bridges as Quorra, a plucky female heroine who more than holds her own inside the film's computer-generated universe. Admirably, Wilde fully devoted herself to the groundbreaking new film, not only throwing herself physically into the role, but collaborating closely with director Joe Kosinski to make sure that Quorra was as interesting and sophisticated as her male counterparts.

BOXOFFICE spoke with Wilde at the Los Angeles press day for TRON: Legacy, where she discussed the process of developing her character into a 21st Century Joan of Arc. Additionally, she offered her thoughts about the prospect of her performances being put in a computer for future use, and generally examined the possible cultural and technological ramifications of the film, whose impact will begin to be felt after it is released on December 17.

What was your reaction when you first watched TRON: Legacy?

It surpassed all my expectations. What happens so often as an actor is you retain the information about the scene that you yourself shot and you obsess over certain scenes that you found the most challenging or interesting, and the rest of the film kind of falls away in your memory or it fades a little bit. So it's been so long since I actually kind of read the script in its entirety, you know, a good year or more, so being able to watch everyone's performance, watch all elements of the story come together was just extraordinary. I was blown away by everyone's work and that was my reaction—"oh my God, everyone pulled it together." I think that was probably the most astounding thing - just being able to see the entire picture together and realize how much hard work paid off.

What did you do to make sure that Quorra was interesting and formidable within this world?

It was a true collaboration to create Quorra. When we originally started putting together ideas for it was really kind of up for grabs because Quorra was not in the original film. [But] Joe Kosinksi was very interested in making her a unique and unusual female heroine, in this film that was unlike any other. And so we worked very hard to make her very intelligent and powerful but at the same time childlike and nuanced so that she would not just be there as a kind of foil for the men, not just the eye candy; I think with a different team, that character could have easily turned into the temptress of the Tron world - she could have just been this sexy femme fatale. With a suit like that it's easy to fall into that, I think. But because Joe was adamant that she not be that, we were able to work together to create Quorra. And I brought the concept of Joan of Arc very early on, six months before we start shooting, and I said, "Joe, I found Quorra. I figured her out. She's Joan of Arc." Because of Joan of Arc was this unlikely warrior - this child who could lead an army. She was kind of unnaturally powerful and seemed to have this connection to another world, to a higher power, to be guided by something greater than her and by selflessness. And that was Quorra. So once we found this historical reference, it was really fun to flesh her out. I was looking at ancient Korean Buddhist warriors and I think that Quorra's one of them; they fight with swords, so Quorra needs a sword. And the next day, great, Quorra has a sword. So that's part of the reason I feel so proud of the finished product of Quorra, because so much hard work went into it, so much collaboration, so much love and I feel very proud of the way she's come out. She's quirky and odd and I like that.

Another reason I was so adamant about making her so intelligent as well as being a warrior is because I really want her to appeal to the female audience, and particularly young females. I want girls to feel inspired by her strength and her wit and her intelligence and her compassion. I think that it's rare these days to have a female character in these types of movies that isn't just there to look really sexy in a suit; too often that's what happens. When I was little we dressed as Wonder Woman [for Halloween], and Wonder Woman represented social justice and honesty—and now I'm not sure who they dress up as. I really want to Quorra to be appealing to both men and women, and I feel very proud of how she's turned out.

Talk about the physical look of her.

The hair was very much inspired by Joan. We wanted something a little androgynous—you know, she's a fighter. That's her purpose; she's there to protect Flynn, and she needs to be able to move fast. So if she had long flowing little mermaid hair it would be very impractical for her, so we wanted her hair to have the kind of slick, non-organic look of the Tron world, but at the same time be really practical and also good-looking. We wanted it to be something flattering, of course, but it was a process of going through several different wigs and designs, and Joe and I worked together very closely on that. As for makeup, we wanted her to look different from the rest of the programs; she has a little bit more of a human look—a little bit more texture, a little bit more skin tone but she still has that very white, very pale look. And Rosalina Da Silva is a makeup artist who designed that look, and it just seemed to make sense for her. The other females in the film have these long, incredible lashes and they're more kind of just unbelievably sexy and rocker chic in their makeup, and we wanted to Quorra to be an alternative to that—still quite intense, but not quite as glamorous. So it was a fun process to figure all that stuff out.

What sort of physical training did you do for this?

Um, it was challenging. I was shooting House while I was training for TRON so I would wake up way earlier than anyone should ever wake up and go and do a few hours of training a day, which included crosstraining, cardio training, and martial arts training [because] a lot of what Quorra does in the movie is mixed martial arts. We had an incredible stunt team called 8711; they've done a lot of the big films of the last ten years, and they are just extraordinary. I really appreciated that they gave me the confidence to do a lot of my own stunts. But they said you're going to have to train for it and I was completely open to that—and I completely physically transformed my body. I have never looked like that before and I will never look like that again. But it was important in creating Quorra to transfer myself physically, because once I understood what it was like to be able to fight and to have those kind of muscles and to have that strength, it changed the way I walked. It changed the way I stood. And I suddenly understood what it felt like to be able to protect myself, which I had never really felt before. So it was the first time I really realized how important that physical training is to creating the character beyond just the aesthetic.

Did you stop training after?

Yes, oh, it was such a relief. I couldn't wait. The entire time we were shooting Tron I was planning my meal of the wrap day. I'm married to an Italian, so it was all about the pasta and wine—I couldn't wait. I would just dream of my giant plate of pasta while we were on set. But on these big films, you're so lucky to have the best trainers in the world teaching you how to fight, and everyone in their department is the best of the best, so it's such an honor to have them focused on creating something for you to maximize the impact of your character. So you have to bring your focus and your energy and never complain, because this is such an honor to have these people working on you to turn you into a little warrior. I mean, it was quite an honor.

What do you think of the film's use of Jeff to actually portray his younger self? And how do you feel about the idea that things you're doing now may be repurposed later on in your career?

I think it's such an interesting concept. My dream is to take Clint Eastwood, Julie Christie, Vanessa Redgrave, and Meryl Streep and put them in [something] like a teen comedy. Because now we can do that. It would be the most expensive teen comedy ever made, but totally worth it. I want to see that movie. But what I really realized while watching Jeff's performance as Clu was no matter what effect they come up with to be able to make actors seem younger or older, it's still driven by the actor. The effects are extraordinary and Eric Barba's team is incredible, but Jeff was driving that rig and adjusts performance as to what makes that character so compelling. And it was sort of a relief to know will actors will still be needed no matter what they come up with—even if we're stuck in a booth somewhere hidden away, they'll still need actors to drive these things and make them interesting. So the fact that Jeff just brought an incredible amount of Jeff to that character is even more extraordinary, knowing all the effects and all the extra work that went into it.

Do actors of your generation think about keeping versions of yourself on a hard drive?

Wilde: I don't think I could escape that images of myself will be kept on a hard drive now; I think that it's inevitable. There's permanence to everything you do now, whether you like it or not, so it can be utilized in the future, hopefully for good reasons. But it's still completely new, and there's only a few actors in this business who have gone through the process that Jeff went through. I think he and Brad Pitt can really discuss the benefits or the challenges of working with a head rig like that for face replacement, so it's really exciting for all of us to be a part of that new technology and be able to share that experience and be part of something so revolutionary.