close
INTERVIEW: On casting Mila Kunis via iChat and his dream of making a comedy 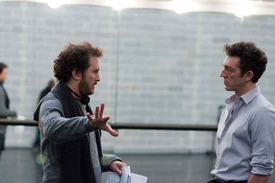 You had to learn how to direct on two different levels: acting plus the language of ballet.

I always knew I wanted to get the camera out of the back of the theater and the wings and put it on the stage. I did that a little bit in The Wrestler, moving along with the wrestling, and I just got excited by being up-close. I thought it would make Natalie Portman's performance easier to read and also give the kind of energy of movement that ballet deserves.

How did you figure out how to tell the cast the way to move?

It was really interesting. Normally, when I talk to an actor, I'll tell them what the story's about and they'll turn it into a motion. When I worked with our choreographer, Benjamin Millepied [who also plays Natalie Portman's dance partner], he'd turn it into movement. It was a very, very fun collaboration watching him create these numbers. I would bring in a camera and start to move with his dancers. We'd adjust the dance for how we needed it for the camera, and then slowly but surely, it would come alive.

It almost seems like directing dance literally taps into a different part of the brain. A performance like Mickey Rourke's in The Wrestler, it seems to come from the inside and then build out. Here, you're taking the outside gestures and then filling in what's happening inside the character.

Yeah, I think there's a truth to that. You just try to figure out what's the story you're telling and how these movements will tell the story. You just figure out the best way to capture it.

Will this movie help men decide to go to the ballet willingly, not grudgingly?

Hopefully! It's pretty sexy, that ballet stuff. Natalie Portman and Mila Kunis are pretty beautiful, so hopefully that will pull them in.

Do you have a favorite ballet?

Swan Lake. I've seen a lot of ballet, but not that much. But I've seen many, many productions of Swan Lake, so now, but because of the making of this film, if I had a choice, I'd still go and see Swan Lake again because I really know it and I understand it and that's helpful.

What drew you to make the film—was it respect for the punishing athleticism?

It's interesting, because when you see a ballet, you don't really see the effort. It looks amazing and beautiful, but then when you get up close, you see the muscles, the tendons, the breath, the sweat, the blood. As a director, that was the big challenge: how to show the effort behind something that looks effortless on stage. That became—it nurtured—all of this body horror that shows up in the film.

That's really true. In fact, in both this and The Wrestler, you're confronting the audience's respect for the athlete. People don't respect wrestling because it's 'fake,' and for ballet, like you're saying, if it's done right, it looks easy.

Right. For both, it's my job to show the effort.

At the same time, your directorial style here is so different from the naturalism of The Wrestler. The theatricality allows you to be free to add all these extra layers—it's almost old-fashioned in its heavy use of symbols. Watching it, I kept thinking that my film studies professors would love to teach it: you're saying so much about gender and the power of the female body.

We were trying to make a live action version of a ballet. And so we kind of took the style of the ballet—it's Gothic, a little bit melodramatic, even campy—and we didn't run away from it. We brought it out and had fun with it. And we tried to create a look and a style that matched that tonality.

And you've created two memorable roles for women who aren't just "The Girlfriend."

Definitely in the ballet world, I was more focused on the female dancers than the male dancers. The story I wanted to tell, the story of Swan Lake, is about two roles: the Black Swan and the White Swan.

That was a great starting point because the characters were so distinct. The White Swan is very pure and innocent and virginal, and the Black Swan is a seductress and very in-control. We certainly had a really incredible split that Natalie could pursue. And then we started to explore all of the grays between the white and black.

Talk to me about casting Mila Kunis-you really threw your weight behind helping her get taken seriously as she makes that transition from TV to film.

I didn't really know her TV work because I never saw That '70s Show, but I saw her in Forgetting Sarah Marshall and she was just smoldering: sexy, natural and very cool. I just liked her vibe. So she was in my head and Natalie called me and said, "What about my friend Mila Kunis to play Lily?" and I said, "That's funny—I was just thinking about her." We met over iChat, actually, because I was in London and she was in LA. We talked and she was just very cool, very relaxed, very centered. I thought that this might work very well, so I cast her off of iChat. Never even read her—totally took a gamble.

You cast a ballet dancer off of iChat? Did you make her wave her arms around to see if she could move?!

That's impressive to go from zero to prima ballerina in months.

She did very well. She worked for five months and did a great job.

If you could learn a ballet move, what do you wish you could do?

Wow. One of those leaping jumps that Baryshnikov used to do—those were impressive!

The ones where you threw your foot back and nearly touch the back of your head?

Oh, I can do that, actually.

These past two years since The Wrestler came out, Mickey Rourke's career has taken off. You must feel proud to have a part in that.

It's been a great thrill. One of the moments that pissed me off the most was we were in Miami before the movie came out and people came up and started making fun of him to his face. I was like, "You're making fun of a guy who's one of the best actors of the 20th century—what the hell is going on?!" I'm very happy that he's in great shape, that people are respecting him again and that he's making movies. I'm thrilled for him. I just saw him a couple weeks ago and he's in great shape—looks amazing.

You appear to be a director who's been embraced by the industry. From your first film, Pi, you've been given acclaim and the freedom to do practically any project you want. But in your films, especially the last two, you're drawn to characters who are dismissed and on the verge of collapse—it's so different than what I'd expect of you.

That's a very good point. I don't know? They're not autobiographical; they're just more themselves and characters that I'm interested in. I think they're characters who are on the edge and pushing themselves to express themselves. It's all about the challenges of life versus your art.

Is there a genre you'd like to try that you haven't yet? A Western?

I'd like to do a comedy. It's gotta be fun to watch a movie you made with an audience and they're all laughing.

What comedy do you wish you'd directed?

I don't know—I try not to get jealous of other people's films. When they're well done, I'm just excited and appreciative that the film is out there.

You were an anthropologist. It's the most underrated social science.

I liked it. But while I was in school, I discovered film-making and I just sort of checked out. But it was a great way to get to know a lot about the world. Different cultures have an interesting way of perceiving the world, which I enjoyed.

Film and anthropology are so intertwined.

Yeah, and now there's all these majors about documentary and anthropology. A lot of people are doing that work. There's that connection made, but a little after my time. Now, a lot of anthro majors get into making documentaries.

Both are just people with an intense interest in culture.

Exactly. And in people's stories. It's the same thing.

You make films that are about the American culture, which anthropologists don't study enough.

The Wrestler was an anthropology study!

And here, Natalie Portman is the type of young American girl people are worried about: so driven to perfection, so insulated, with a definitive helicopter mom. I identified with her because I've known people who were raised with that pressure to be perfect.

You directed Hugh Jackman in The Fountain, his most challenging role. What did you see in him then that you can bring out in The Wolverine, the latest X-Men movie that you're directing?

We'll see what happens. I just love Hugh Jackman and it's a pleasure to be collaborating with him again.