The Coens on 'True Grit': It's a Western, but it's not a Western 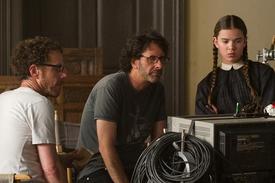 Although they always seem to bend material to their will, making it impossible to imagine anyone else directing it, the Coen brothers have never made the same movie twice. Since making their debut with Blood Simple in 1984, Joel and Ethan Coen have almost methodically ventured into one genre or subject matter after another, creating worlds that are certainly different than one another, and yet somehow all seem to occupy the same space—that is, the Coens' own, distinctive universe. And their latest effort, True Grit, is no different: based on the same novel that produced John Wayne's 1969 film of the same name, Ethan and Joel transform the idea both of a remake and a traditional Western with their singular portrait of a determined young woman who recruits a boozy U.S. Marshal to hunt down her father's murderer.

BOXOFFICE spoke to Joel and Ethan at the recent Los Angeles press day for True Grit, where they deconstructed their approach to Charles Portis' novel, and discussed the challenges of creating a film that obeys the conventions of a Western while also being something distinctively Coen-esque.

You two have done numerous genre movies—screwball comedies, film noir, detective. What about Westerns did you want to sort of attack or celebrate?

Ethan Coen: I don't think we thought about it as a genre movie so much as you might think. It was an interest in the novel, the story, Charles Portis' novel. It is a Western, inarguably. There are guys with six-shooter guns on horses, but it's not a Zane Grey story. It's not a Western in that sense. Really, we were thinking about the novel more than doing a Western per se.

Would you say this is less a Western then, and more of a dark comedy? Also, was there any concern about how well the actors would tackle the stylized dialogue you wrote?

Joel Coen: Well, there's certainly a lot of comedy. There's a lot of humor in the Charles Portis novel. It was one of the things that attracted us to the novel and the idea of adapting it. We wanted what was funny about the book, what was the humor of the book, to come through in the movie. That was important.

Ethan Coen: The dialogue too, the formality of it and the floweriness of it also is just from the book. Jeff [Bridges] noticed—that was the first thing Jeff mentioned, noticed, and liked, the kind of foreign-sounding nature of the dialogue and lack of contractions. It wasn't a problem for us. We just lifted it from the book. I don't know how the actors feel about it.

Joel Coen: I have to say, one of the things, when we first saw the first take of Hailee [Steinfeld] doing a scene from the movie, 99.9% of the hundreds or thousands of girls that read for this part didn't have the facility to [speak as we needed them to]. They sort of washed out at the level of not being able to do the language. That was something which was never an issue with Hailee. Right from the beginning, it was clear that she was completely comfortable with the language. The language isn't, as everyone's pointed out, our language. That was the threshold level at which you could sort of hope to do the part, but Hailee had it right from the get-go in a very, very natural way.

What sort of process did you undergo as you were adapting this, especially since it was already made into a successful movie? What sort of research did you do?

Joel Coen: We left all the research to Charles Portis. The book was, obviously, very steeped in the period, the language, the periodicals, the weapons, the culture of the period in order to write the novel in such a detailed way. We were happy not to do any work we didn't have to, basically. That's from our point of view.

At what point do visuals, what shows up on the screen, enter your screenwriting process?

What was the most challenging part of making True Grit? Roger Deakins, your cinematographer, said it was keeping to the schedule.

Joel Coen: That's true, because it's a largely exterior movie, and we were shooting in really difficult places. The weather was very uncooperative, so we were trying to really get a lot done in terms of the number of setups we usually do to stay on schedule. And then, fighting weather and other issues that were sort of really peculiar—animals, dealing with horses, production issues—that made it difficult to shoot it in such a short period of time.

Did shooting any of those iconic Western landscapes pose additional challenges?

Ethan Coen: You know what? That's one thing that's not faithful to the novel. The landscape is a total cheat, but we kind of thought people will think it's a Western, and some things you just can't mess with. People want that.

Joel Coen: The whole pictorial idea of the movie would have been much different in a place like Arkansas. The honest answer is it kind of becomes this mishmash of different considerations that go into where you're shooting and how you want to treat the landscape. They're a little hard to sort out after the fact, but it's everywhere from the practical to just what does the movie actually want to be about.

Was there anything from the original that you wanted to reference or pay homage to?

Ethan Coen: Not for us. Not the negative either. We'd seen the movie when it came out. But we were kids then. We hadn't seen it since, and only really vaguely remember it.

But you do re-create the iconic scene where Rooster Cogburn rides into battle with the reigns of his horse between his teeth as he blasts away. Did you consider playing the scene differently?

Joel Coen: Leaving the scene out? No, no, we never considered leaving the scene out, no. No, it's the big action climax of the movie in a certain respect. It was true that what Jeff was doing just from a riding point of view was not something that we assumed could be done in a context that would actually show him riding a horse not having the reigns in his hands, firing the guns, and galloping the horse. Very difficult to do. You have to be a really, really good rider to do that and even if you are a good rider, you have to have the right terrain, the right horse and all the rest of it. It was not a simple thing, which is why I don't think they did that in the original. You didn't actually see it that way in the original movie, so there were things that Jeff had to do that were really difficult to accomplish. But it was also a very complicated scene in terms of coverage. There were scenes that [cinematographer] Roger [Deakins] had to do in terms of actually being able to physically shoot this stuff on uneven terrain, getting the camera in certain places. It all had to be broken down, and it was a rather complex thing and done over a series of days.

Do you see Mattie falling in the snake pit as a sort of moral consequence of shooting a man?

Joel Coen: That's certainly not the reading we were giving to it. As we mentioned in other contexts a couple of times, one of the things that struck us about the novel, just generically, was that what we took away from it more than a Western was the sense of it almost being this youthful adventure story, kind of fitting into the genre of what you might call young adult adventure fiction or something like that. Frequently in those kind of stories, it was something that was really interesting to us, actually, just in terms of how the story worked. In connection with that, you often have this kind of Perils of Pauline acceleration of action at a certain point where one thing just leads to another, leads to another, leads to another. That's the way the ending of the novel felt to us. There's a big shootout in a field, she almost gets strangled, then she shoots a guy, and then she falls into a pit of snakes, then she rides. That's, I think, closer to the way we were looking at it.

So you don't consider it a morality tale?

Joel Coen: That's certainly an element of the story and the novel, but I wouldn't associate it with her killing a guy and then falling into a pit with snakes. I don't think that's where it comes in.