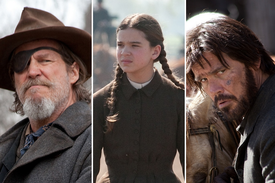 It seems like it took 40 years, but someone finally realized that Jeff Bridges was a real-deal movie star. Following his Best Actor Oscar win for Crazy Heart in 2009, Hollywood gave him two opportunities in the same year (in the same month, really) to headline big-budget, mainstream movies: TRON: Legacy, which opened on December 17, and True Grit, which opened on Wednesday. What's most amazing however is that Bridges not only plays two dramatically different roles in the films, but he pulls both of them off without looking like he's doing much work at all.

BOXOFFICE recently spoke to Bridges, along with his co-stars Josh Brolin and newcomer Hailee Steinfeld, at the Los Angeles press day for True Grit. In addition to discussing their on screen collaborations, the three actors examined their approaches and personal challenges with their characters, and offered insights about the appeal of working on a Western.

Did you have any hesitation initially taking on a role that John Wayne made famous?

Jeff Bridges: Well, I was curious why these guys wanted to make that movie again, and I think it was Ethan who I talked to first and he corrected me. He said no, we're not making that movie. We're making the book as if there wasn't any other movie ever made kind of thing. We were just referring to the book and I wasn't familiar with the book. He said well, check that out and tell me what you think, and I read the book and then I saw what they were talking about because it's such a wonderful book and it suited them so well, I thought. And God, what a great character. You know, most westerns have that strong silent type and here's this boorish guy. So that was going to be a lot of fun, I thought.

At what point did you sort of figure out this character? Because when we spoke to you last year for Crazy Heart, you indicated that you hadn't locked Rooster down yet.

Bridges: You know, each scene is an opportunity to show a different facet of the person you're portraying. But I begin developing a character pretty much the same way every time. You're looking at the script or if you're lucky enough to have a book, you're looking at that material and seeing what other characters say about your character, what you say about yourself, what the author says about you, and that tells you quite a bit. And then one of the first things you do when you're hired on to make a film is you work with a costume designer, in this case it was Mary Zophres, who was also the costume designer on The Big Lebowski. That's one of the cool things about making movies—it's a collaborative art form, so you have all these other artists who are concerned about just specific areas. It might be what your character, what the room your character lives in, what it looks like and the clothes look like. So the first people you meet is the costumer because they have to make all those clothes, so Mary has these wonderful books that she brings out. And see, you look, now here's a hat like this, like this, and the character starts to fall in place and as you dress it, you're looking in the mirror. And there comes a time when the character starts to tell you what it wants and you might prefer oh, this scarf looks nice you know. And probably the same thing happens when you're making a movie, too. You know sometimes you want to do something it just doesn't; it's not what the movie wants and that's a wonderful time when that happens, and I'm not sure if there's one particular time it happens. It's just kind of a slow process of coming into focus. As far as the models, you know I used to love it when my dad would play, you know a western. You know when he, you know appeared at the front door all dressed up in his cowboy clothes it was you know, a thrill to me so I guess there was some of my dad in there.

Josh, you're playing a really interesting character—a sort of violent, simple-minded guy. What sort of work did you have to do to tap into that?

Josh Brolin: When I came I talked to Joel and Ethan about it in the beginning, and they said something about he's sort of a dim bulb. I thought no, he's more like a broken bulb with no filament at all. And I liked the idea of doing this duality of a guy who you know, he's talked about throughout the whole movie so when you see him, you expect a monster. You know, especially when he turns around the first time, that shot from the horses; he's got that look, and whatever he's doing, I'm not sure what the look is personally, but then he starts talking and it's a different kind of guy. It's like, so what are you doing here? I don't understand what you're doing over here. It's almost conversation. And I like that better, because it's different than the methodology of what's been created through the movie is ripped from you—whatever pigeon-holing that you've created in your mind of what a sociopath is, and then you see it come back when he's alone with her. Then you see that great low shot that they do of that transition that happens of I'm not taking this shit anymore, and now I realize I'm out in the middle of nowhere and now I have to manifest this rage again. So you realize it's true, a true sociopath. And it was fun to be able to do that, but talking about the language before, I think a lot of things came together in rehearsals. Because I don't think anybody really knew how to do the language, and then you see Jeff come in as Rooster. And then you go, I can say mine like that, too! And then you go oh, so I can pull off the no contractions by doing that, and it's true, you do, and then you start to find this. Because I thought when I did the voice I thought, this is going to stick out so horribly. It's too much, I think I did too much. And then I saw everybody else in the film. You don't even notice it.

Josh and Hailee, how did you two prepare for the scene by the campfire?

Steinfeld: 15 minutes after I met [Josh] for the first time, we were rehearsing that, and you were on top of me with a knife to my neck, so it was kind of interesting but I don't know.

Brolin: I don't know how to answer that question, really. I mean she's so precocious and amazing and present and just kind of went with it. I think it was more nerve-racking for me than it was for her. She's very comfortable in her own skin, and that scene was about her talking and being super confident and this little man-child hating the purity of her. And Josh loves her purity, loves it. I mean, I'm so taken by her in every which way. I just think she's incredible, so it was much harder for me. But everything she did was easy. The rest of us make it really hard, but it was great. I had a really good time, and then other than the cursing between me and Matt and Barry—and Barry doesn't curse so much. How much did you earn? I think the "F" word was five dollars and the "S" word was a dollar, so she made about $100,000. An incredible experience though. We had a great time, really, really great time. I can't really tell you the process because it was a fairly easy process. In rehearsal it was different. We really searched a lot in rehearsal for character and all that, but she had already had it; she was the one person who had it down before the rest of us really started.

Jeff, can you talk a little about the iconic scene that everybody waits for when you've got the reins in your mouth and you're riding?

Bridges: I remember that day well and right in the beginning of the day Joel coming over to me and saying, what do you think about really trying this deal? And I said oh, well, that's kind of interesting, yeah. [I was] a little anxious, a little fear. I mean, I ride myself but to do it in my teeth—and so we did it that way and it wasn't as tough as I thought actually. It was kind of cool.

This seems like a pretty dramatic contrast to TRON: Legacy, especially since that film seems so clean and this one involved you getting really dirty. How did you and the other actors adapt to that?

Bridges: Well that's the fun of my job, that I get to play all different kinds of guys. We did a reshoot for Tron about a week after we completed True Grit and I had the same make-up guy, Thomas Nellen, so going from Rooster, all the dust and the grime and the dirty teeth, you know a few days later, back in the chair, him putting a hundred little black dots on my face to have motion capture done, it was bizarre. But that's the gig; that's the fun of it.

So it was a fun thing doing a western movie and subjecting yourselves to all of the physical stuff that came with that?

Did any of you know that Hailee was such a sassy girl?

Bridges: I didn't really, you know. Because she's got a very sweet side as well.

Hailee, how was it being the only girl among all of these men? And how many of your own stunts were you able to do?

Steinfeld: I did most of them. There aren't really any, besides the falling down the snake pit; that was the only, that was the biggest stunt, right? So there wasn't too much of that, but I learned to shoot a gun. Before I went on location, that was one of the things that I wanted to make sure I had a clue of what I was doing, so I had my dad take me to a shooting range with a friend of ours who is an LAPD officer so he kind of told me everything I needed to know.

And how was it working with all of these guys?

Hailee, was there any advice or guidance that these older actors might have given you while making the movie?

Hailee Steinfeld: I think the best advice that the actors have given me is to not take anything too seriously but to have fun. And well, take it somewhat seriously, right? But just to have fun with things.