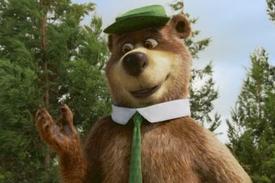 Yogi Bear is now playing in theaters, and it is the latest in a series of live-action adaptations based upon animated cartoons. Directed by Eric Brevig (Journey to the Center of the Earth), the film is like many of its predecessors in that it seems to have unlimited commercial potential but questionable critical merits. But what seems to distinguish the wheat from the chaff in this rarified subgenre is the filmmakers' approach to the material, which varies from a more or less literal translation to something tongue-in-cheek, although interestingly sometimes the ones that take themselves less seriously end up being more successful.

For all intents and purposes, the first true feature-length live-action interpretation of an animated character was Robert Altman's 1980 film Popeye, which set a number of standards for adaptations—including their decidedly mixed reception. Even (or maybe especially) with a pedigreed albeit idiosyncratic filmmaker like Altman at the helm, the film was only a modest success, earning $60 million worldwide against its $20 million budget (which 30 years ago was a fairly astounding number). Meanwhile, the film was also criticized for its uneven fealty to the character's mythology—in particular, the decision to reveal that Popeye hated spinach, which is of course the source of his strength.

Ultimately, that sort of creative choice was in keeping with the original conception of the character (apparently before the more popular cartoon suggested he loved leafy greens), but its mixed success started a debates over a certain kind of fidelity which plagues adaptations even today—namely, how accurate can and should filmmakers be? The answer turned out to be: try to satisfy longtime fans as much as possible, as long as that faithfulness doesn't interfere with its box office prospects.

Although the 1980s suffered from a dearth of other cartoon adaptations—presumably because the small screen was producing its own franchise fare for future generations - following the failure of Masters of the Universe: The Movie, in the ‘90s business boomed (at least quantitatively) for these adaptations. In 1994, Brian Levant revived The Flinstones with John Goodman and Elizabeth Perkins, and the film went on to earn more than $140 million in the U.S. alone. Richie Rich, however, was released the same year, and earned only $38 million, which was $2 million short of its budget. Subsequently, Hollywood produced live-action versions of Teenage Mutant Ninja Turtles (1990), George of the Jungle (1997), Mr. Magoo (1997) and Inspector Gadget (1999) among others, and the first TMNT was by far the biggest success, earning more than $200 million while in theaters. (Although to be fait, Eastman and Laird originally created the Turtles as comic book series.)

The first decade of the new millennium has by far produced the most live-action adaptations, including several full-fledged series, such as with Scooby Doo, which enjoyed three installments, and Alvin & the Chipmunks, which (thus far) has had two. For the most part these films have been derided by critics, partially because they seem to exemplify Hollywood's diminishing ability to create new properties, and partially because they seem like thoughtless, kid-friendly cash-ins. And even if something like Speed Racer can be considered an earnest and unique creative endeavor, it can still be seen as a failure because of its poor box office showing, while an Alvin & the Chipmunks sequel can be a stunning success, even as it leaves critics scratching their heads why anyone, even children, would want to subject themselves to such stupidity.

With many of the films in this new generation of adaptations, studios enlisted A-list actors to provide the voices for computer-animated characters, which further exacerbated critics' concerns that talented actors and filmmakers were wasting their abilities on pop drivel. (In last year's hit film Zombieland, Bill Murray, who provided the voice of Garfield in his first cinematic iteration, more or less confessed that his work in the film was among his only regretful Hollywood experiences.) In Yogi Bear, Dan Aykroyd and Justin Timberlake, respectively, provide the voices of the title character and Boo Boo, Yogi's loyal sidekick. And whether they are ultimately vindicated for joining the cast of a runaway commercial hit or condemned for acquiescing to paycheck hackwork, they have become in a way the standard for big-budget adaptations of cartoons and animated fare. Because without those stars, who augment the property's immediate familiarity, these live-action films don't seem quite as special, at least not to audiences.

That said, the vast majority of these films exist to distract children and separate parents from their disposable income, so perhaps the artistic integrity (or even the technical competency) of the subgenre is irrelevant. And suffice it to say that quality is of course in the eye (and wallet) of the consumer, so one man may adore the acerbic chemistry of the ensemble in The Adventures of Rocky & Bullwinkle while another may prefer the familial charm of the cast of Fat Albert. But the continued success of even some of these films virtually guarantees that studios will continue to try and revive more cartoon series in the future; and evidenced by forthcoming versions of stuff like The Smurfs, there are no technological limitations to what's possible. Rather, all that remains are the creative ones, which means that there may be plenty of sweet and superficially satisfying treats soon appearing on the plates of viewers worldwide, but without sufficient motivation, few of them will contain the sustenance or nourishment of spinach, at least artistically speaking.