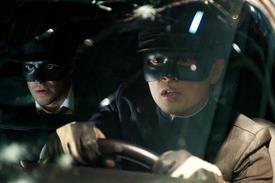 Seth Rogen may have executive-produced, written and starred in The Green Hornet, but it's Jay Chou who stole the film: playing the title character's put-the-kick-in-sidekick partner, Kato, the Chinese actor manages to overshadow his co-stars even more than the movie itself means for him to. A pop star in his home country who previously worked with such filmmaking luminaries as Zhang Yimou and Yuen Woo-Ping, Chou is a natural-born movie star who also happens to have plenty of actual talent to boot, and his Hollywood debut in Hornet shows that his appeal transcends geographic borders, even if when shooting started, he only had a month to learn English.

Boxoffice sat down with Chou at the recent Los Angeles press day for The Green Hornet. In addition to talking about the challenges of mastering the English language, the young actor discussed the prospect of steeping into the shoes of Bruce Lee, who played Kato before him, and offered a few hints about his future in Hollywood. Check out our exclusive video interview below: